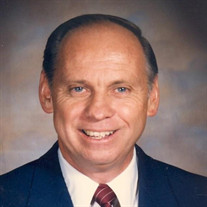 Charles Elwin Boice was born on December 27, 1935 in Long Island New York to his parents Alfonzo Boice and Florence Kate Otteman. He was their second child and only son. He grew up in various places in California including Pasadena where he was active in the school band playing the trumpet. He graduated from Brigham Young University with a degree in Education and promptly obtained a Master’s Degree in Education Administration. He worked as an elementary teacher, a principal and a superintendent in West Covina, Modesto, Doyle and Thornton. Chuck was an active member of the Church of Jesus Christ of Latter-day Saints. He served in many capacities as a missionary in the Southern States Mission, a Bishop, a Stake President, as a High Councilman four times and as an ordinance worker and officiator in the temple. His favorite calling was that of a home teacher. He loved to serve others and always made those around him feel special and loved. He will especially be remembered for his devoted service to two of his disabled sons. He was married to Katherine Sandlin on June 3, 1960 in the Manti Temple, the same day of his graduation. They were married for 33 years until Kay’s death on July 30, 1993. They were the parents of eight children. He was married to Linda Lou Manwaring on December 18, 1993 for 26 years. He is survived by his wife, Linda Boice, his only sister, Phyllis Burk; by his eight children and eight step-children, 52 grandchildren and 32 great grandchildren. He was a devoted father of many who loved him dearly. Charles passed away on Wednesday, May 13, 2020 of congenital heart disease and natural causes. The family gives special thanks to Dr. Gale Skousen for his loving care. Chuck and Linda were members of the Payson Eighth Ward in the Payson West Stake where Linda will continue to reside. A viewing will be held on Sunday, March 17, 2020 from 10:00 am to 12:00 Noon at Premier Funeral Services, 1160 North 1200 West, Orem, Utah.

Charles Elwin Boice was born on December 27, 1935 in Long Island New York to his parents Alfonzo Boice and Florence Kate Otteman. He was their second child and only son. He grew up in various places in California including Pasadena where he... View Obituary & Service Information

The family of Charles Elwin Boice created this Life Tributes page to make it easy to share your memories.