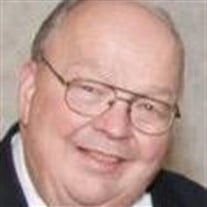 Charles E. Burgoyne, our dear husband, father, great grandfather and friend, peacefully passed from this earthly existence May 2, 2017. Fortunately, he was at home surrounded by loving family. Charles was born in Montpelier, Idaho, November 14, 1931 to Elmer and Irene Burgoyne. He graduated from Montpelier High School, served a two-year LDS mission in the New England States area in 1951-52, attended Utah State University and graduated from the University of Utah with honors in the field of Physics. He married his high school sweetheart, Mary Lou Simmons, in the Logan LDS Temple July 10, 1953. He worked for Lockheed Aircraft, in Van Nuys and Palo Alto, California in the missile and space division, then Sperry Utah Engineering Laboratory as an engineer/mathematician, 16 years as Vice President of BMA Data Processing Co., 15 years as Founder and President of Burgoyne Computers, Inc. Charles worked for the LDS Church for one year and then was called to be a computer missionary. During this time, he wrote the program for and was instrumental in supplying the first extracted names for temple work. Charles was a devoted member of the LDS Church, serving in many callings, including an ordinance worker in the Bountiful Temple for six years. Other callings include: Ward and Stake Clerks, Elder’s Quorum President, Counselor in Bishopric, High Councilor, Gospel Doctrine teacher, High Priest Group Leader, Stake Executive Secy., Home Teacher, Scout leader and most recently, Family History Consultant. Also, part time as a missionary in the translation dept. of the Church. He served on the committee for the Open House for the Bountiful Temple, where he acted as executive secretary and wrote the ticketing software for the open house and the dedication. His computer expertise continued to serve him well during short term missions to assist with the temple open houses in Vernal, Utah; Preston, England; and Madrid, Spain, where he also set up the call centers and wrote the computer ticketing programs. He served an 18-month mission with his wife as Executive Secretary to the Europe West Area Presidency in Frankfurt Germany, serving with Elders Dean L. Larsen, Dieter F. Uchtdorf and Neil L. Andersen. 1995-96. Charles had a firm testimony of the Gospel and was anxiously engaged in serving the Lord in whatever capacity he was called. He was a friend to all, and delighted helping others – especially with computer or family history needs. For the last 16 years, he has been very involved in family history. Not only in doing his own, but helping others and teaching them to expand their own family history lines, and also how to use computer programs to facilitate that work. Family was very dear to Charles. He loved family activities/traditions and having the family around him. It was very important to him to raise his children with the same principles and standards of honesty and respect that he exemplified. He is survived by his wife of 63 years, Mary Lou, his four children, Jeanie (Mark) Reynolds, Janis (Barry) Herrscher, Bob (Sandy) Burgoyne, Randy (Dani) Burgoyne, nineteen grandchildren, their spouses and 37 great grandchildren. Many thanks to neighbors, friends, Church leaders, and medical personnel who have touched his life for good, and have been a friend and a support particularly in this last year. Funeral services will be held Saturday May 6, 2017 at 11:00 am with a viewing beginning at 9:30 am at the Val Verda 1st Ward Chapel, 2633 South 50 West, Bountiful, Utah. Be sure to note that the Friday May 5th viewing will be at a different location: Val Verda Stake Center 2651 South 500 West Bountiful, Utah from 6 to 8 p.m. Condolences may be sent to www.premierfuneral.com

The family of Charles E. Burgoyne created this Life Tributes page to make it easy to share your memories.