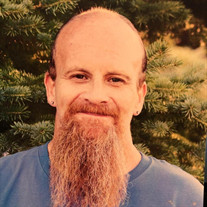 Charles Lawrence (Charlie) Bush – 1967-2021 “Gone fishin” Charles Lawrence Bush, age 54, son of Gerald and Louise Bush, passed away in Ogden, Utah, August 11, 2021, due to complications from a lengthy illness. He was born June 16, 1967, in Tooele, Utah, and lived his early years in Clinton, Utah, later moving to Ogden, Utah. He enjoyed such outdoor activities as fishing and camping. In his younger years, he particularly enjoyed these activities with his grandfather, Lawrence Platt. He is survived by his parents; sisters Christine (Lee) Lipsey, Beverly (Jeff) Morford, and Elizabeth Bush; brothers Richard (Rachael) Bush, Vernon Bush, uncle and aunt, Bob (Raylene) Bush, nieces and nephews, Kim and Kylie Morford, Caitlin and Nathan Lipsey, Tobin and Samantha Bush and many cousins; long-time companion Venessa Wallace, life-long friend Bill Wilson and many other friends. He was preceded in death by his grandparents, Vern and Venetta Bush and Lawrence and Melba Platt, several aunts and uncles, numerous cousins, and many friends. The family expresses grateful thanks for the extraordinary treatment provided by the medical staff of the Intensive Care Unit of Ogden Regional Medical Center. Cremation by Premier Funeral Services, Roy, Utah. Interment will be at the Clinton cemetery, located at 800 North 750 West, Clinton, Utah, with a graveside service to be held on Saturday, September 4th, at 10 AM. In lieu of flowers, please make a donation in Charles’ name to your favorite Charity. Condolences can be sent to the family at www.premierfuneral.com

The family of Charles Lawrence Bush created this Life Tributes page to make it easy to share your memories.