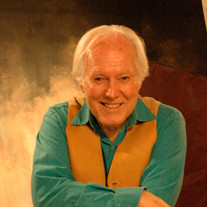 Charles Grenade Bewley Curran 1935 - 2017 Charles Grenade Bewley Curran graduated from life September 5, 2017, after a valiant battle with lung cancer. Born October 5, 1935 in Los Angeles, California to Charles Grenade Bewley Sr. and Marion Ahern. “Grenade” excelled in track& field and proudly worked most of his life in the film industry. He grew up in Los Angeles, California and then spent the later part of his life in Utah. After his parents’ marriage ended, Grenade took on the last name Curran from his stepfather, Pearce Patrick Curran. Grenade was outgoing and befriended many famous film stars and was loyal to his family and lifelong friends, including Karl Engemann. His childhood and lifelong best friend was his cousin John Ahern, with whom they shared a special bond. They got their Eagle Scout awards together, explored the hills of Southern Utah, both pursued careers in film, as John was an Emmy and Academy Award winning cartoonist for Disney. Grenade was active in the LDS church and served 2 missions to the Central States & Oklahoma. Grenade married Elmary Davidson in the Salt Lake Temple, Dec 15, 1961, with whom he had four children. He later married Donna Gould, February 16, 1974 and was sealed in the Los Angeles Temple and together they had four more children. Sacrificing his career for the love of his family, he relocated to the state of Utah. Which is where he found the love of his life, Marta Macdonald whom cherished and cared for him the last 16 years. Grenade had a large heart and could be called on at any time to help his children with whatever was required, drawing from his generosity and his many talents. Grenade worked both in front of the camera and behind during 40 years in the film industry—starting as a child hanging around film sets while his mother Marion either was acting in films or painting sets. As a young man he worked on such television programs as The Mouseketeers, Lost in Space, Star Trek and High Chaparral. While working as a Production Assistant for a number of films, he hobnobbed with such film stars as Clark Gable, Charlton Heston, John Wayne, Roy Rogers, Clint Walker, Henry Fonda, Burt Lancaster, Dick van Dyke, Walt Disney and James Mason. He worked on such films as: Seven Brides for Seven Brothers, Singin in the Rain, The Great Bank Robbery, Planet of the Apes, Will Penny, Hello Dolly, Sergeants 3, Camelot, 20,000 Leagues Under the Sea, and Davy Crocket. On August 25, 2001, Grenade married the love of his life, Marta Macdonald and they were sealed in the Manti Temple. Together they explored the red rock desert canyons of Southern Utah in search of Native American petroglyphs and ancient dwelings. They shared a love of Western American culture, movies, the LDS Church, BYU football, 8 wonderful children and each other. Marta was devoted to Grenade, caring for him up to the very last breath. She has been an inspiration and a great blessing to the Curran family. Grenade is survived by his wife, Marta Macdonald Curran, 8 children: Jahn, Rena (Ren Hayhurst), Justin, Jerome (Nicole), Andrea, Erica Hannert, Sydney (Drew Johnson), and Kirsten; his sister Cynthia Seyerle; Grandchildren: Kenya, Jordan, Eviane, Cerissa, Jenelle, Kalub, Ezekial, Eisa’bel, Ella, Banyan, Nakai, Gage, Donivan, Brianne, Nyah, Sophia, and Lilyan; one great-grandchild, Oliver; Shirley Ahern and all the Ahern Family, and many loving friends, and ward members. Grenade is preceded in death by his mother Marion, father Charles Bewley, StepDad Pearce “Pat” Curran, beloved cousin John Ahern, dear friend Bobby Engemann, and many other cousins and friends. Funeral services will be 11:00 am, Saturday, September 9, 2017 at the LDS Chapel located at 3110 West 1390 North, Provo, Utah where a viewing will be prior to services from 9:30 to 10:45 am.

The family of Charles Grenade Bewley Curran created this Life Tributes page to make it easy to share your memories.