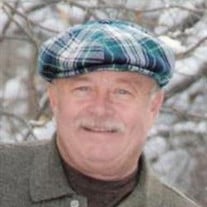 Charles Anthony Iacabell (Charlie "Cha") was born in San Francisco, CA to Antonio and Shirley Iacabell on July 7, 1943 and soared into the sunrise on his final flight March 31, 2014. Charlie served in the US NAVY and was honorably discharged in 1968.  He graduated with a Bachelors Degree in Liberal Arts from Highlands University in Las Vegas, New Mexico and taught Art at a local Junior High. He was an EMT in Taos, New Mexico, Mechanic in Santa Fe, New Mexico and he Loved working at the airport in Las Vegas, New Mexico. He worked in Salt Lake City for Intermountain Drug Testing until he was recently diagnosed with Cancer and was unable to work.  In 1998 he searched for and found the love of his life Marion. They lived in Las Vegas, New Mexico before moving to West Jordan Utah where they currently reside. Charlie enjoyed many adventures in his Miata "Zippy" whether the top up or down (Charlie loved to go topless) a drive to the local Home Depot or a road trip to see his sister Connie in Albuquerque. You could always find him tinkering in his garage, playing with his model cars/planes, watching the history channel or making jewelry.  Preceded in death by his Father and Mother, Daughter Micki, Beloved Pets: Scooter, Heidi, Sadie, Shammy and Chico. Survived by wife Marion, Sister Connie (Bob), Son (Paul), Daughter (Brandi), Grandchildren: Bryan, Rayann, Lacy, Austin, Maysen and Adalyn.  Nieces Shannon and Cathy.  Charlie had a great sense of humor. He was a loving, kind and generous man. A great care-giver, wonderful companion and father. He will be truly missed!  I know that you must miss me, by the tears rolling down your face. But believe me when i tell you that I'm in a very good place.  There are many roads to drive on, Things to Tinker with and Fix. My dogs were here to greet me with a Nuzzle and a Lick.  So please don't worry about me, My spirit feels light as can be. There's no more pain to plague me, I'm young again and Free.  Until we meet again,  Love Charlie

Charles Anthony Iacabell (Charlie "Cha") was born in San Francisco, CA to Antonio and Shirley Iacabell on July 7, 1943 and soared into the sunrise on his final flight March 31, 2014. Charlie served in the US NAVY and was honorably discharged... View Obituary & Service Information

The family of Charles Anthony Iacabell created this Life Tributes page to make it easy to share your memories.