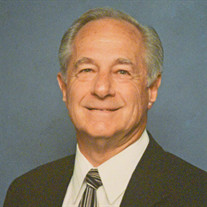 Charles Waterous Logan passed away on January 3, 2019. He was born on November 07, 1930 in Kansas City, Missouri. The Logan family relocated to Hermosa Beach, California, where Chuck spent most of his childhood. He loved the beach and loved to surf. After graduating from California Military Academy, he enlisted in the US Navy, where he served honorably for 4 years. Chuck was an excellent athlete in tennis, football and basketball. He received numerous awards in athletics, including MVP in football, captain of the football team and in 1947 he was voted “Best Athlete”. He earned his Master’s degree in Physical Education. Chuck married Edna Louise Ray on January 4, 1951 and had 3 children. In 1983 the couple divorced and on June 28, 2009, he married Clora Ridlon in Las Vegas, Nevada. After Clora’s passing on July 26, 2013, Chuck met Trudy Rimer and developed a wonderful friend-relationship, which lasted until his death. He worked as a Director in Parks and Recreation for Oxnard, California, Everett, Washington and Jurupa, California. His last year was spent in Raintree, an assisted living home in Syracuse, Utah. He loved his home and all of the residents and staff there. Chuck was loved and respected by many. He was a member of the Church of Jesus Christ of Latter-Day Saints. He was ambitious, had a positive attitude, great sense of humor, and was friendly, outgoing and very kind. He loved his family and friends, and they loved him. He is survived by his children, Karen Logan Majkut (Bill), Charles Craig Logan (Cherri), Christopher Logan, 6 grandchildren, and 20 great-grandchildren. Although Chuck has returned to his Father in Heaven, he will forever remain in our hearts.

Charles Waterous Logan passed away on January 3, 2019. He was born on November 07, 1930 in Kansas City, Missouri. The Logan family relocated to Hermosa Beach, California, where Chuck spent most of his childhood. He loved the beach and loved... View Obituary & Service Information

The family of Charles Waterous Logan created this Life Tributes page to make it easy to share your memories.