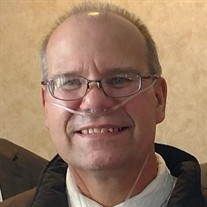 Charles Kevin Pozernick passed away on March 20, 2019 after a valiant and prolonged battle with lung cancer. He was born in Burley, ID on Dec 6, 1964, the son of Albert and Barbara Pozernick. He was the second youngest of 8 boys and 2 girls. He attended Elementary, Jr. High, and High School in the Minidoka County school district in south central Idaho and later attended Hansen High School in Twin Falls County. Charles loved life and lived it to its fullness. He was very active and was known in his youth, at times, to run to and from school focusing his energy on physical fitness. He enjoyed spending time with his brothers especially outdoors - hiking, biking, climbing, and shooting. In his teen years, he began seasonal employment that later evolved into a full time position in the quarry and surface mining industry. This occupation often took him to remote wilderness locations that were filled with adventures and trials that could fill a book with stories. He was known to be the “life of the party” while sharing these fantastic adventures with great enthusiasm and vigor. Charles worked a variety of other employment including dairy farm hand, hospital maintenance, frozen foods, automotive, and construction. He met, fell in love with, and married Patricia Medina in Provo, UT on April 14, 1996. They have 3 wonderful children, Charles Jr., Audrey, and Adrian. The family was sealed in the Timpanogos Temple Nov 1, 1997. Charles and Patricia later divorced but each remained devoted to the care of their children. Charles was an active member of the Church of Jesus Christ of Latter Day Saints and devoted father. He will be remembered for his love of life and dedication to his faith and family. He will be greatly missed. He is survived by his former wife Patricia Medina Pozernick, his children Charles Jr. Pozernick , Audrey Pozernick and Adrian Pozernick, – siblings Marie (Robert) Pozernick-Luna, Glen (Lisa) Pozernick, Calvin Pozernick, Peter (Tammy) Pozernick, Frances (Jerry) McCray, Brandon Pozernick, Gregory (Stephanie) Pozernick, and David (Angela) Pozernick. He was preceded in death by his parents Albert and Barbara Pozernick and eldest brother Wesley Michael Pozernick. Funeral services will be held March 23, 2019 at the Cherry Hill 7th Ward meeting house of the Church of Jesus Christ of Latter Day Saints on 135 E 2000 S Orem, UT. Viewing will be from 9:30-10:45 and funeral service at 11:00. Following the service, interment will be at the Salem City Cemetery965 S 140 E Salem, UT.

Charles Kevin Pozernick passed away on March 20, 2019 after a valiant and prolonged battle with lung cancer. He was born in Burley, ID on Dec 6, 1964, the son of Albert and Barbara Pozernick. He was the second youngest of 8 boys and 2 girls.... View Obituary & Service Information

The family of Charles K Pozernick created this Life Tributes page to make it easy to share your memories.