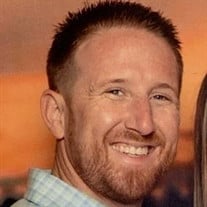 Chase Randal Ostler, our son, father, brother, grandson, and best friend, returned home to his Father in Heaven on June 11, 2019, succumbing to injuries sustained in a motorcycle accident, and surrounded by his loving family. Chase left this life much as he had lived it—having a ton of fun. Born on November 12, 1984 to Randy and Kelli Ostler, Chase led a life full of contagious energy, unconquerable optimism, and a real talent for “debating.” Challenges in his young life could never fully get in his way, and he tackled the many trials that came his way with courage and a healthy sense of humor. Chase will be remembered by all who knew him for his quick laugh and his generous spirit, attested to by those occasions upon which he literally gave the shirt off his back to someone in need. Chase’s belief in the power of service was strong. His experiences with adversity at a young age turned his heart outward; as a result, he loved people with unwavering loyalty and was constantly thinking of those who had less than he did. An example of faith in the face of challenges, Chase never gave up in trying to improve himself and in growing in his relationship with his Savior, Jesus Christ. In the final years of his life he graduated from UVU with a degree in psychology and began working as a counselor and mentor to teenagers who experience the same kinds of challenges he had as a youth. He also managed to get the girl of his dreams who filled his life with so much happiness. In addition to his parents, grandparents, three sisters, brothers-in-law, nieces and nephews, and a crowd of loving extended family, Chase is survived by his two best friends and closest companions: his twelve-year old son Kyler and his cherished Camille, with whom he loved to visit the temple in the last few years. Our hearts are tender; nothing can replace the Chase-shaped hole that has opened in our lives. But we know that he is needed on the other side, where he must already be talking everyone’s ear off and making sure his robes look just right before going to work. And we add, as Chase would say, “We guarantee it!” Survived by: Randy and Kelli Ostler, parents; Eldon and Marsha Forman, grandparents; Ashlee and Jon Harris, sister; Kelsee and Zach Bradshaw, sister; Shelby and Derek Myler, sister; Kyler Ostler, son; Camille Gilbert, love of his life. VIEWING: Friday, June 14, 2019, 6:00–8:00 PM, and Saturday, June 15, 2019, 9:00–10:30 AM at the Bluffdale Stake Center, 2742 West 14400 South, Bluffdale, UT 84065. FUNERAL: Saturday, June 15, 2019, 11:00 AM, Bluffdale Stake Center, 2742 West 14400 South, Bluffdale, UT 84065. GRAVESIDE SERVICES: South Jordan City Cemetery, 10618 South 1055 West. In lieu of flowers, a GoFundMe account has been set up for Chase’s son Kyler. https://www.gofundme.com/fund-for-chase-ostler039s-son-kyler-ostler

Chase Randal Ostler, our son, father, brother, grandson, and best friend, returned home to his Father in Heaven on June 11, 2019, succumbing to injuries sustained in a motorcycle accident, and surrounded by his loving family. Chase left this... View Obituary & Service Information

The family of Chase Randal Ostler created this Life Tributes page to make it easy to share your memories.