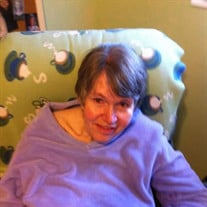 Cherrie Newman Dyer passed peacefully of natural causes on the morning of April 25, 2021, at her home in West Haven, UT. She was born on Mar. 9, 1940, in Salt Lake City to Joseph Hyrum Newman and Dora Eggett Newman. She was raised with her one sister and four brothers in the Sugarhouse area of Salt Lake City, and she graduated from South High School. Cherrie attended both Brigham Young University and the University of Utah, though not at the same time. She earned a degree in elementary education with a minor in art from BYU in 1973. Cherrie met Daniel Sinclair Dyer at a church dance and was immediately impressed by the way he introduced himself and by his graceful dancing skills. They married in August of 1964 in the Salt Lake LDS Temple. Cherrie’s dream was to have at least seven children, but she had to settle for five: Daniel Wesley, Shellee, David, James, and Aimee. The greatest sadness of Cherrie’s life was the loss of her son James, who was stillborn, and the loss of her daughter Aimee, who passed in 2020. Cherrie was passionate about helping others who had lost a child as well as those who have faced the challenges of mental illness. After Dan’s graduation from the University of Utah in 1967, the young family moved to Dayton, OH for his work. In 1973, Cherrie was delighted to have the opportunity to “return home,” as Dan’s work brought their family back to Utah. They settled in Kaysville, where they would live for the next 37 years. She loved everything about living in Kaysville: the 4th of July Celebrations, the plays at Happy Hollow, cooking for family and friends, as well as the usual hometown favorites (Bowman’s, Harry’s, Arctic Circle’s halibut and chips, Taco Time, fruit from Storey’s Orchards on Highway 89, and many more). Cherrie’s primary occupation was her dream job of homemaker. She loved being a mother, and she welcomed her children’s friends into her house as though they were her own children. Cherrie loved to paint, and to study and discuss religion, but most of all, Cherrie enjoyed spending time with her friends and relatives. Cherrie was not enthusiastic about having animals in the house, but she tolerated her children’s habit of adopting mangy stray cats with grace. Cherrie and Dan’s marriage, like their personalities, was peculiar but perseverant, and they stayed married until Dan’s passing in 2009. As Cherrie’s health declined, she had to move to assisted living, first in West Jordan under the care of Margaret Daniels and finally at Peachtree Center in West Haven, UT. Cherrie is survived by three of her children: Daniel [Lynette] Dyer of South Ogden, UT, Shellee Dyer of North Ogden, UT, and David [Lisa] Dyer of Heber City, UT, and by her five grandchildren: Brian, Brandon, Bryson, Oliver, and Malia. She is also survived by all of her siblings: Dianne [Clyde] Hardman of Anaheim, CA, Dick [Madeleine] Newman of Palm Bay, FL, Sandy [Helen] Newman of Salt Lake City, UT, Jay [Polly] Newman of Draper, UT, and Gary [Karol Lin] Newman of Bountiful, UT, and by her numerous nieces and nephews who remember her fondly. A funeral will be held at the Kaysville Crestwood chapel (1039 Crestwood Road, Kaysville, UT) on Saturday, May 1, at 11 AM. Viewing and visitation will be offered from 6-8 PM on April 30, and prior to the service from 10:00-10:45 AM on May 1. Immediately following the funeral service, a graveside service at Kaysville City Cemetery (Southwest Corner) will be offered so that anyone who is social distancing will have the option to participate in that portion of the service. The weather will likely be warm and sunny for the graveside service, so please bring a folding chair, a hat or umbrella, and sunscreen. Cherrie’s health was poor for many years, and the family is extremely grateful to all who helped care for her. This includes the staff at Peachtree Assisted Living Center and Brio Hospice, Margaret Daniels, Cal Richards, Michelle Peterson, the Kaysville Crestwood Ward Relief Society, and so many others. We wish to convey a warm thank you to all who participated in her care. Viewing will be from 6:00-8:00 p.m. on Friday, April 30, 2021 at the Church of Jesus Christ of Latter-day Saints building located at 1039 Crestwood Road, Kaysville, Utah. Funeral services will be at 11:00 a.m. on Saturday, May 1, 2021 with a viewing one hour prior at the church. Burial will follow at the Kaysville City Cemetery. Condolences can be sent to the family at www.premierfuneral.com

Cherrie Newman Dyer passed peacefully of natural causes on the morning of April 25, 2021, at her home in West Haven, UT. She was born on Mar. 9, 1940, in Salt Lake City to Joseph Hyrum Newman and Dora Eggett Newman. She was raised with her... View Obituary & Service Information

The family of Cherrie Newman Dyer created this Life Tributes page to make it easy to share your memories.

Cherrie Newman Dyer passed peacefully of natural causes on the...