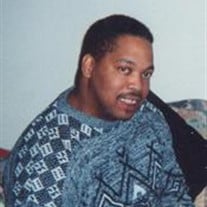 Chester Burnett was born on January 28, 1958 to Earl Lee and Mary Early Burnett in Salt Lake City, Utah. Chester peacefully passed away in his sleep in the early hours of March 8, 2013. He lost his hard fought, year long battle with colon cancer. Chester is survived by the love of his life, his wife Vera Sanchez Burnett. They met in July of 1996 and were married April 3, 1998. At the age of 17, Chester married Pauline Bernal and together they had 4 children, Chester Jr., Angela, Charles, and Olivia. Chester work hard all his life to provide for his children. In addition he cared for and was a father to Adrian, Shane, Tiffany and Royal. Chester welcomed Vera’s children, twin sons Gene and Perry, and daughter Nisha into his family. Chester was a proud grandfather of 26. Chester worked as a baker at Wonder Bread for 28 years, often working overtime to provide for his family. After his time at Wonder Bread he worked as a janitorial engineer at the University of Utah until a disabling injury force his retirement. Chester loved his children deeply and for over 30 worked to provide for his family. He also enjoyed spending times camping and fishing. In January 2012, Chester was diagnosed with Stage 4 Metastatic Colon Cancer. As he had done all his life, he put up an incredible fight. He endured months of chemotherapy in hopes of extending his life so that he could continue to support his family. Ultimately the battle was lost, but the lessons he taught us will live on forever. Chester is survived by his wife Vera, his 10 children and 26 grandchildren. He is also survived by his brothers Calvin, Carl Lee, Clarence and Earl Lee, and his sisters Caroline and her husband Clark, and Cathy and her husband Marc. Chester was preceded in death by his parents, brother Charles and son Perry Spight. Chester had a lot of love and support over the past year as he fought his battle against cancer. We would like to thank Dr. Sharma and his staff, especially Cindy Davidson, of the Huntsman Cancer Institute, for staying positive and helping Chester fight the good fight. We also want to thank Vanessa and Emogene of Encompass Hospice Care, with great compassion and caring, made Chester’s final days bearable, not just for Chester but for the whole family. Special thanks to Jo Ann for her generous donation of a cemetery plot. Chester will be laid to rest next to his mother Mary. We would also like to thank Rev. France Davis for his support and counsel during Chester’s final days. And finally to Finis Holt and Chester’s sister Cathy Wolfsfeld who were there from the initial diagnosis, through every doctor’s visit, chemo session and late night trip to the ER, thank you for giving all that you had and then some. Chester truly appreciated your love and support. Funeral Services will be held at 11:00 a.m. on Thursday March 14, 2013 at the Calvary Church 1090 South State St. SLC, UT. Interment will be at the Redwood Memorial Gardens following the services. In lieu of flowers, the family requests that you make a donation to help pay for Chester’s final expenses. Please visit www.giveforward.com/chesterburnett

Chester Burnett was born on January 28, 1958 to Earl Lee and Mary Early Burnett in Salt Lake City, Utah. Chester peacefully passed away in his sleep in the early hours of March 8, 2013. He lost his hard fought, year long battle with colon... View Obituary & Service Information

The family of Chester Burnett created this Life Tributes page to make it easy to share your memories.