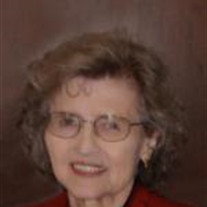 Christa R. Kinsey, 76, passed away surrounded by her family in the loving arms of her husband December 11, 2010 in Murray, Utah. She was born December 31, 1933 in Salt Lake City, Utah to Emil and Johanna Dupper Amann. Survived by her husband... View Obituary & Service Information

The family of Christa Ruth Kinsey created this Life Tributes page to make it easy to share your memories.

Christa R. Kinsey, 76, passed away surrounded by her family in...