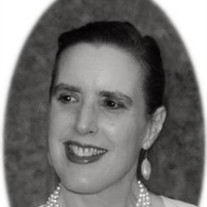 Christina Marie Darais Oberbeck departed this life peacefully on February 4, 2015, after courageously fighting a rare lung disease for nearly a decade. Christina was born to Alexander and Norma Darais in Provo, Utah, on January 19, 1955. Christina was preceded in death by her parents, Alex and Norma Darais. Christina is survived by her husband, Edwin Charles Oberbeck, her son, Alexander Edwin Oberbeck (age 17), her daughter, Isabella Christina Oberbeck (age 11), her siblings, Norman (Judy), Christopher (Vicki), Marcus (Debbie), Thomas (Suzanne), Andrea, and Damon (Stacey), her two brothers-in-law, Steven (Carolyn) and Kevin (Cathy), and many nephews and nieces. Christina graduated from Provo High School in 1973 and attended BYU with an emphasis in art and English, in which she achieved high marks. While in the art department she met a fellow young artist, Edwin Charles Oberbeck, to whom she was married August 5, 1978; subsequently, they resided in the Salt Lake City Avenues most of their married years. Christina and Edwin found opportunities to travel, sometimes aided by Christina's employment at Eastern Airlines. Their trips included Greece—with its abundance of artistic and cultural heritage. There she was also able to spend time with her dear cousin Aglaia and other Greek relatives. Christina had a great love for literature, poetry, music, and the visual arts. On another trip to Europe, she was struck by the beauty of a Bonnard painting and burst into tears. Edwin and Christina's lives fit well together in that they were able to share so deeply in their appreciation of the humanities—they encouraged each other in their art creations. Christina's passion for the arts was exceeded only by her devotion to her beloved Edwin, Alexander, and Isabella. Like her mother Norma, Christina was an exceptional cook and baker. She was the family member who could most closely replicate Mom's legendary recipes. Happily a vegetarian, she had the knowledge and skills to make healthy yet tasty dishes. Guests to her home enjoyed her sweetness, warmth of character, and sumptuous entrees—served complete with antique china, fine linens, and often by candlelight. Christina's quilts and handiwork showed her artistic touch as an interior decorator and seamstress; her creative eye was apparent in her lovely herb, iris and rose gardens as well. True to her given name, members of the family often commented about her Christlike qualities. She was our family angel. The debilitating illness that would gradually take her life strengthened her resolve to put others first and make their challenges the topic of discussion rather than hers. During many difficult years, she shared what was savory, bright, and delightful. For all these things we hold her in dearest remembrance. A graveside service will be held to honor Christina, prior to her interment, on Friday, February 13, 2015, at 1 p.m. at Salt Lake City Cemetery, southwest area (near Main Street and 280 North).

The family of Christina Darais Oberbeck created this Life Tributes page to make it easy to share your memories.