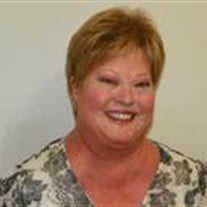 Christine “Chrissy” aka Mom and Nana, passed away on January 10, 2013 having fought ovarian cancer for several years. She was born February 5, 1956 to Tom and Agnes McCombs in Salt Lake City, Utah. She was married and sealed to her Romeo from high school in 1974, for all time and eternity in the Salt Lake temple. For 38 years her Romeo, aka Mitchell “Scott” Quayle, romanced her like a newlywed and referred to her as his bride to everyone. Scott himself passed away this June from melanoma skin cancer. He went to prepare her yet another dream home which he has come to take her to, where they can be one together for eternity. In striving to be worthy of the temple sealing covenants where families can be together forever, they want to continue with three of the best children ever. Their eldest, Thomas their son, daughter Sian and youngest, their daughter Missy. In addition, three of the best grandchildren ever too. Karson, Chloee and Whitney. The Lord and her family are the most important and bring her the greatest love and joy. Chrissy and her family are full of humor and love to be together. Well, maybe not all the time. Once, while vacationing in Florida at Walt Disney World, an exhausted Chrissy bypassed doing more rides with the family to rest. In doing so she ended up all sprawled out like a snow angel on a cement slab snoring her head off, becoming the parks new amusement attraction, as on-lookers began gathering more in more in laugher. Upon returning the family was too embarrassed to wake and claim her. She should stick to cruises for vacations, where she says it’s the best because you can travel the world all from your 24-hour food buffet. Until we meet again, Bon Voyage. Services to be held on Tuesday, January 15th at 410 E. Shelley Lane Chapel, Grantsville, Utah. Viewing at 10:00am. Funeral at 11:00am. Luncheon at 12:00pm. Internment will be at Wasatch Lawn Memorial Park, 3401 Highland Drive, Holladay, Utah at 2:30pm the same day.

Christine &#8220;Chrissy&#8221; aka Mom and Nana, passed away on January 10, 2013 having fought ovarian cancer for several years. She was born February 5, 1956 to Tom and Agnes McCombs in Salt Lake City, Utah. She was married and sealed to her... View Obituary & Service Information

The family of Christine Carol Quayle created this Life Tributes page to make it easy to share your memories.

Christine “Chrissy” aka Mom and Nana, passed away on January...