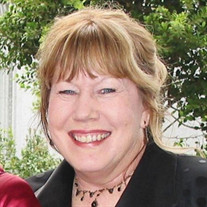 Christine Luanne Wiggins (Stagg), age 69, passed away on March 1, 2021 in Provo, Utah. Christie was born on January 9, 1952 in Hollywood, California. She grew up in Riverside, California with her parents and 3 siblings. She graduated from Ramona High School in 1970. Christie was a bookkeeper at University of Redlands for many years, and was a poker dealer at San Manuel Indian Bingo & Casino for 10 years. She moved to Utah to retire in 2012. She was an active member of The Church of Jesus Christ of Latter Day Saints and served a mission in the church employment office, as well as in the Provo City Center Temple. She enjoyed scrapbooking, The Beatles, D'Elias Grinders, the beach, crocheting, quilting, sewing, family history, and looking at Victorian homes in Redlands, California. She loved her family and friends immensely; especially her grandchildren. She had a very kind and gentle soul. Though her life was filled with many hardships and trauma, it never broke her faith or spirit. She was a strong mother and role model. Christie is survived by her children: Kyle Wiggins, Patrick Wiggins, Amy Rittman & son in law Scott Rittman, Jared Wiggins & daughter in law Amanda Wiggins, as well as her grandchildren: Emma, Lincoln, Emmett, Rachel, Miriam, Dean, Mayla, Lily, and Logan, her sister Sherri Artrup & brother in law Larry Artrup, brother Roger Stagg & and sister in law Cindy Stagg. She is also survived by nephews, nieces, cousins, and many friends. She was called home and will be joining her parents, Robert and Sharon Stagg, and brother Robert Stagg. A memorial service will be announced to family and close friends in the coming days.

Christine Luanne Wiggins (Stagg), age 69, passed away on March 1, 2021 in Provo, Utah. Christie was born on January 9, 1952 in Hollywood, California. She grew up in Riverside, California with her parents and 3 siblings. She graduated from Ramona... View Obituary & Service Information

The family of Christine Luanne Wiggins created this Life Tributes page to make it easy to share your memories.