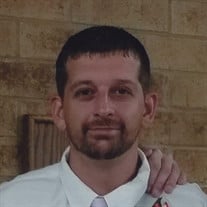 Christopher Collings January 10, 1984 to March 14, 2016 Christopher Collings ended his journey in this life March 14, 2016. He was born January 10, 1984 in Salt Lake City, Utah. He moved with his family to Tilton, New Hampshire where he attended elementary and secondary schools. As a teenager he worked at Loudon’s Race Track, then worked in the grocery business for several years recently returning to Utah where he was employed at Mountain States Industrial Services. He was living in Cottonwood Heights, Utah, at the time of his death. He was a wonderful young man, friendly and helpful to all whether family, co-worker or stranger. He loved the outdoors, repairing and riding motorcycles. He was witty, kind and could easily bring a smile and bit of laughter to those around him. Chris is survived by his parents, Richard and Tondra (Hayes) Collings, older brother Jeffery (Jemelene) Colling s, sister Amy Collings, a w Alex Collings and niece Kaoru Collings and numerous aunts, uncles and cousins. A memorial service will be held at the Marrott Meadows LDS Chapel, 2400 West 150 North, in Provo, Utah at 11:00 a.m. Friday, March 25, 2016, with dedication of the grave to follow. Christopher will be interred in the Evergreen Cemetery in Springville, Utah. Gone too soon, he will be missed.

The family of Christopher "Chris" Collings created this Life Tributes page to make it easy to share your memories.