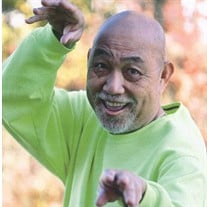 Cipriano Abrajano De Guzman, Jr. was recalled to the Lord’s barracks on March 22, 2019. He was 72. Born March 2, 1947 to Cipriano Sr. and Cristeta at the US Navy hospital in Subic, the Philippines - Cip, Chip, Jun, JunDeg, or Nonoy - depending on who knew him, was quite a character fondly remembered for his unique, loving and oftentimes unintentionally funny quips and, of course, wacky conspiracy theories. But certainly he has touched the lives of all who knew him. He married the lovely Gloria in 1967 and raised one loving child, Gidget, and three rambunctious offspring: Marc, Grace and Genghis. And then there was Luvi. He honestly loved them all but frequently forgot their age and birthday, with Genghis being born, he said, on September 31. He was an engineer by profession, a covert military man by ambition, and traveled the world over for fun, love, and adventure, but mostly for petroleum dollars. This took him to places of such fine repute like Iran, Saudi Arabia, Venezuela, Alaska and finally, the continental USA. Ever the wanderer, he would always sail back to Gloria, his homeport. He was the original international man of mystery even before the name became hip. As mentioned, he is survived by the aforementioned rambunctious children plus a mini shitload of grandchildren – Nico, Ina, Jesse, Josh, Joboy, Gilly and Zach. A family gathering in his memory will be held at 3:30 PM Saturday, Premier Funeral Services, 5335 S. 1950 W. Roy, Utah. Family and friends will be asked to go directly to the gathering room to celebrate the extraordinary being of this greater-than-life man.

The family of Cipriano A. De Guzman Jr. created this Life Tributes page to make it easy to share your memories.