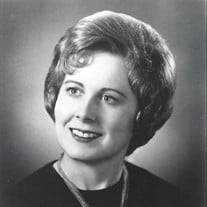 Clara Ann Dilworth Perry, 79, of Provo, Utah passed away on May 24, 2021, in Springville, Utah surrounded by her loved ones after a brave battle with a rare neurological condition. Born November 23, 1941, in Gooding, ID, Clara was the oldest of eight children born to Stanley Howard Dilworth and Ann McNeil Dilworth. She had fond memories of growing up in Alaska, Washington, and Idaho. Clara married John Lee Timothy Perry in the Idaho Falls temple and together they had six children. Clara and John raised their children primarily in Oregon and Washington. They later divorced and Clara moved with her children to Utah. She lived there for the remainder of her life except for periods of time when she moved to live with, care for, and serve family in Idaho and California. Clara valued learning, enjoyed family history work, and took great pride in her “little” family. She loved her children and grandchildren and supported them in their endeavors. She wanted to be wherever they were and especially enjoyed attending their school and church programs and celebrating their successes. Clara worked for the Washington Education Association for many years and felt proud of her contributions to that office. In 1989, Clara began working for BYU Bookstore in Provo, Utah as an administrative assistant and accounting specialist. She retired after nearly a decade of dedicated support to the school, her co-workers, and the students. Clara was Salutatorian of the graduating class of 1960 from Carey High School in Carey, Idaho. She received a Secretarial Diploma in May 1961 from Twin Falls Business College and attended classes at BYU before serving her mission. When her children were teens, Clara returned to school and earned her BA in Business Administration from University of Phoenix. She attended BYU education week as often as she was able and sat in on classes at BYU when in her 70s. Clara loved people and wanted to speak to them in their native language, so she taught herself Spanish and was also studying Romanian, Italian, French, and Portuguese. Clara was a faithful member of The Church of Jesus Christ of Latter-Day Saints and was called to serve in the Texas mission in 1963. She was a loving and attentive visiting teacher and held callings as Ward Chorister, Sunday School teacher, Primary teacher, and in the Relief Society Presidency. She loved the sister missionaries and served with them when she lived in Brentwood, CA. Clara also had a calling in the Salt Lake City, Utah temple baptistry. Music was very important to Clara. She enjoyed sharing memories of her time performing in Opera Workshop at BYU. She nearly always sang in the ward choir and often sang solos in church. She was a member of the Old Time Fiddlers and enjoyed traveling around Utah with her tambourine and her beautiful soprano voice to perform at various fairs and other events. In the last years of her life, Clara moved to the Valley Villa Apartments in Provo, Utah. She was a valued member of her community and was very loved and appreciated. She served her neighbors and often spent time with them visiting, attending the temple, and sharing meals. Clara was always concerned with everyone else’s well-being. If she saw a neighbor in need, she readily gave of her own supply to meet the needs of another. Clara developed deep bonds with her neighbors and friends at Valley Villa and considered them family. She was an integral part of unifying and enriching her community. Clara is preceded in death by her parents Stanley H. and Ann Dilworth, and her brother Stanley R. Dilworth (wife Rhonda). She is survived by her children Dave Perry, Michael and Laura Perry (Angela, Priscilla, Gabriella, Ashley, Dylan), Jennifer Owens (Blake, Rebecca, Rachel, Amy), Ann and Jamil Taylor (Alli, Kaylah, Aidan, Ronin), Chrissy and Michael “Hank” Henry (LuLu, Lucie), Charla and Craig Romrell (Bryson, Brianna, Olivia, Easton), 8 great-grandchildren, and by her siblings, Corienne Marks, Bryan, and Kelly Dilworth, Jay and Leslie Dilworth, Kerry and Debra Dilworth, Kevin Dilworth, and Trudy and Kurt Bockoven. Family and friends are invited to remember and honor Clara at an open house gathering on Friday, June 11th from 6:30 to 8:00 pm at 1560 S. 1100 W. Provo, UT, 84601. Funeral services will be held at the same church building on Saturday, June 12th at 10:00 am. All guests attending the services must wear masks. For those who are not able to attend in person, Clara Perry’s Memorial Service Zoom Link: https://us02web.zoom.us/j/5627100080?pwd=dFdsZFBNRjRQNjkyRHQxWkJQR0xrUT09 Meeting ID: 562 710 0080 Passcode: h66YYW Flowers sent the day of the service will be accepted at 1560 S. 1100 W. Provo, UT, 84601. Otherwise, flowers may be sent to 586 S. 1660 W. Provo, UT, 84601.

Clara Ann Dilworth Perry, 79, of Provo, Utah passed away on May 24, 2021, in Springville, Utah surrounded by her loved ones after a brave battle with a rare neurological condition. Born November 23, 1941, in Gooding, ID, Clara was the oldest... View Obituary & Service Information

The family of Clara Ann Dilworth Perry created this Life Tributes page to make it easy to share your memories.

Clara Ann Dilworth Perry, 79, of Provo, Utah passed away on May...