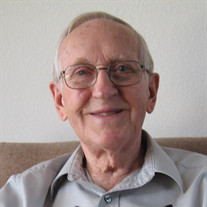 Clark Wells Cooley passed away on March 5, 2016 in Salt Lake City, Utah. He was born in Standing Stone, PA January 26, 1924 to Charles Leroy Cooley and Lulu Amanda Roof Cooley, the youngest of five children. He grew up in rural PA. During WWII he enlisted in the Army at age 18. Before deploying he married, Elizabeth Walsh (Betty) of Bath, New York, the love of his life. As part of the D-Day invasion, he landed on Omaha Beach managing to survive the Normandy offensive, liberation of Paris, Battle of the Bulge, and was on his way to join the fighting in the Pacific when the war ended. He returned home to his loving wife, and his firstborn son Craig. Grateful for the G.I. Bill he attended college at New Mexico Highlands University in Las Vegas, New Mexico, receiving a Master’s degree. He moved his growing family to Michigan where he worked as Director of Personal Services for General Motors in Warren, MI, until his retirement. Returning to New Mexico, Clark and Betty lived a wonderful life together, traveling the world, and making lots of new friends. Clark was a longtime member of the Santa Fe Host Lions Club, and volunteered with many organizations. He exercised every day at the Fort Marcy Recreation Complex with the 6 am group, his loyal wonderful friends of many years. Clark was preceded in death by his loving wife of 68 years, Betty, and his sons Craig and Bruce. He is survived by his two daughters Diane Cooley and Sheila Barnett (Daniel Barnett), and many loved family members back home in PA. The family wishes to thank the Avenues Courtyard Assisted Living Community, and Millcreek Home Health and Hospice for all the love, respect, and compassion he received over many months. After cremation, he will be placed next to his wife and sons at the Rivera Family Memorial Gardens Cemetery in Santa Fe, NM.

Clark Wells Cooley passed away on March 5, 2016 in Salt Lake City, Utah. He was born in Standing Stone, PA January 26, 1924 to Charles Leroy Cooley and Lulu Amanda Roof Cooley, the youngest of five children. He grew up in rural PA. During WWII... View Obituary & Service Information

The family of Clark Wells Cooley created this Life Tributes page to make it easy to share your memories.