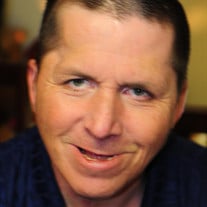 Clark Alan Workman passed away peacefully on December 17, 2019 surrounded by his family. He is survived by his father; siblings three brothers Robert, James, Josh and one sister Deanna, and by his father. He is preceded by two mothers, Valda and Shiela. Clark was born May 26, 1966 in Rosa de Lima Hospital, Henderson Nevada to Ernest Dee Workman and Valda Mae Keeler. He played little league baseball. He was a very good pitcher. At the age of 12 he had brain surgery which left him many challenges throughout his life! During his time in the hospital, dad Snuck in a puppy for Clark, that mom and dad had promised him if he was brave and went through the surgery. Since then he has had several dogs over the years, he loved them, and they were his companions. He was in a coma for several months after the surgery. He had to learn how to walk and talk again after the surgery. He Attended Basic High school in Henderson Nevada, and Graduated from Granger High School in West Valley City Utah. He attended one year of college at, what was then the College of Southern Utah, now Southern Utah University. When he was older he served his church as a missionary, in the Little Rock, Arkansas Mission. He had many fond memories of his mission. He never married, but loved to be around his family! His nieces and nephews were a substitute for his own children. Clark loved to shop at Walmart, play card games, and bowl and play billards. ‘Tis the gift to be simple, ‘Tis the gift to be free, Tis the gift to come down where we ought to be And when we find ourselves in the place just right, ‘Twill be in the valley of love and delight. When true simplicity is gain’d To bow and to bend we will not be asham’d To turn, turn will be our delight, Till by turning, turning we come round right. Simpler forms of metals are more easily tempered in many instances, this tempering is used to create a toughness, such as in an Iron based alloy. Clark was tempered and felt being hammered, so to speak, much in life. He knew that it was because Heavenly Father loved him, and wanted to make him Tougher. Because of this, Clark also had a special ability to understand others in their difficult situations. The meek shall inherit the earth. Funeral services will be held at 11:00 am, Saturday, December 21, 2019 at the Welby 8th Ward, 8385 South 4800 West, West Jordan, Utah, with a viewing to begin at 10:00 am. Interment to follow at Valley View Memorial Park, 4335 West 4100 South, West Valley City, Utah.

Clark Alan Workman passed away peacefully on December 17, 2019 surrounded by his family. He is survived by his father; siblings three brothers Robert, James, Josh and one sister Deanna, and by his father. He is preceded by two mothers, Valda... View Obituary & Service Information

The family of Clark Alan Workman created this Life Tributes page to make it easy to share your memories.