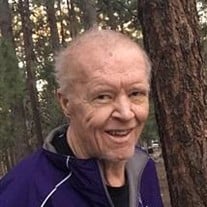 Clinton Steven Nielson, age 73, passed away peacefully on August 24, 2019 in Ogden, Utah with his sweetheart of 50 years and his children at his side. Born in Delta, Utah on December 21, 1945 to Clinton Sterling Nielson and Thelma DaBell Adams. He grew up in Leamington, Utah with his two brothers, Alan and David, and his sister, Janice, on the farm with his favorite horses and dogs. Known by Steven, he served an LDS mission to the Northwestern States. After knowing each other for only 12 days, he was engaged to Becky Ouderkirk and married 6 months later in the St. George LDS Temple on March 19, 1969. Shortly afterward, Steven was drafted into the US Army for the Vietnam War and they lived in Fort Leonard Wood, Missouri; Fort Lewis, Washington and spent 4 fun years in Germany before returning home to Utah. They lived in Magna, Leamington, Plain City, and spent many wonderful years in Ogden Valley. He served another mission with Becky to Knoxville, Tennessee before they settled in South Ogden, Utah. If he met you in the grocery store, or at the post office, he would have told you of his children’s adventures and struggles and cracked a joke. Before he became too ill, Steven loved traveling and one of his favorite pastimes was delivering suitcases to missionaries in far flung locales using Becky’s flight benefits. He was also passionate in securing the rights and benefits owed to Vietnam Veterans and helped assist many friends with their applications. He loved Sunday dinners with chocolate cake, books by Louis L’Amour, James Bond films, milkshakes from Warren’s, and hearing his grandchildren laugh from his made-up songs. He is survived by his wife, Becky, and his seven children and twenty-one grandchildren. Clinton Shayne and Iilona Nielson and their children, Alexa, Zarra, Noah and Lucy (Highland, UT), Kimberly and Michael Przybyla (South Jordan, UT), Amy and Jason Allen and their children, Trevor, Katelyn Tams, Elizabeth, and Tyler (Farr West, UT), Samuel and Abby Nielson and their children, Solomon, Luke, Scarlett, Isabelle, Wesley and Rhett (Saratoga Springs, UT), Zachary and Becca Nielson and their children, Ben, Sarah, Josh, Reddick, Jacob, and Ruddger (Ogden, UT), Karen and Jordan Ziegler and their son, Alexander (Tucson, AZ), and Julie and Adam Michaud (Ogden, UT). He is preceded in death by his parents and two sisters, Karen and Janice. In honor of his wishes, we will forgo a funeral and he will be cremated. We will have an open house in his honor on Saturday, August 31 from 5:00pm-7:00pm at their home, 932 E 5575 S Ogden, UT 84405.

Clinton Steven Nielson, age 73, passed away peacefully on August 24, 2019 in Ogden, Utah with his sweetheart of 50 years and his children at his side. Born in Delta, Utah on December 21, 1945 to Clinton Sterling Nielson and Thelma DaBell Adams.... View Obituary & Service Information

The family of Clinton Steven Nielson created this Life Tributes page to make it easy to share your memories.