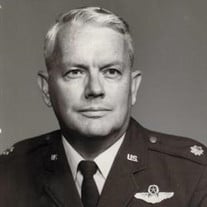 Allan Fechser Clyde Allan Fechser died at home on July 10, 2015. He was born in 1932 in his grandfather’s house in Provo, Utah—son of Clyde Isaac Fechser and Faye Murran Boyden. Allan attended Provo schools, graduating from Provo High School. He attended Brigham Young University for a time before attending and graduating from the University of Utah with a degree in Mechanical Engineering. Allan was a licensed professional engineer. He later earned a master’s degree in Public Administration from the University of Oklahoma. While attending the University of Utah, Allan met and married Colleen Johnson, who provided a life of love and fun. After college, Allan became an Air Force pilot for three years before returning to civilian life as a design engineer. In 1963 he was recalled for active duty, flying fixed-wing aircraft and helicopters. He was twice awarded the Distinguished Flying Cross for air rescue activities during the Vietnam conflict and other awards. He retired from active duty as a lieutenant colonel in 1980. Following active duty service, he taught at Westminister College in Salt Lake City for a few years and then enjoyed designing and supervising the building of his Davis County house. A member of The Church of Jesus Christ of Latter-day Saints, he served as a teacher, as Elder’s Quorum president, in high priest group leadership, as branch president, as bishop, and as a member of the stake high council. Allan loved to read and to work with his yard, garden, and fruit trees. Allan is survived by his wife; children Peggy Ann (Don) Sutton, David Allan (Lori) Fechser, and Cappy Anne Fechser; six grandchildren; and sisters Elaine (Dee) Davis and Susan (James) Waite. He is predeceased by his sisters Phyllis (Mark) Freebairn and Joyce (Wayne) Brown. Graveside Services with Military Honors will be held at 10:00 a.m. on Tuesday, July 14, 2015 at the Kaysville City Cemetery, 500 Crestwood Rd., Kaysville, UT 84037.

The family of Clyde "Allan" Fechser created this Life Tributes page to make it easy to share your memories.