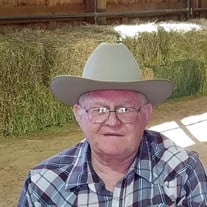 Clyde M Fielding passed away on July 5, 2021. He was born on July 24, 1944 in Ogden, Utah. He was the youngest of 5 children of Earl and Willena Fielding. He was raised in Huntsville and as a young man, he enjoyed Junior Posse, jockeying for horse races and being involved in cutter racing. His family moved to Ogden his senior year, where he graduated from Weber High School. He met the love of his life Dalene and was married August 6, 1966. Together they had 4 children, Darren (Kelly) Fielding, JoDene (Richard) Davis, Theron (Emily) Fielding and Shawn (Holly) Fielding. He worked at the DDO in Ogden as a warehouseman/forklift operator and was always working several part time jobs to support his family. He enjoyed square dancing with Dalene, hunting, fishing and golfing with his dad and brothers throughout his life. He was a scout leader and coached his boys in baseball and JoDene in softball. His baseball teams were very successful and were always at the top of their league. He was his grandkids biggest and loudest fan. If he knew about their games, he was always there. Later in life, they purchased a camp trailer and spent many weekends camping with the family. There was always a great story to be told, filled with a little dash of sarcasm and plenty of Fieldingism’s, which he was happy enough to pass along to the family. We made many cherished memories during these adventures. Clyde leaves behind his wife, children and 11 grandchildren; Austin, Colton, Makenna, Jaxson, Justin, Shalee, Tanner, Carter, Jordan, Lexie and Preslie; great-grandchildren, Easton, Haylee, Barrett and Lakota Tay and his older brother Reed (Toni) Fielding. He was proceeded in death by his parents, sisters Betty and Mary and brother Leon and his great grandson Jake. A viewing will be held on Sunday, July 11, 2021 from 5 to 7pm at Premier Funeral Services 5335 South 1950 West, Roy UT 84067. Graveside services will be Monday, July 12, 2021 at 11am at the Ben Lomond Cemetery in North Ogden.

Clyde M Fielding passed away on July 5, 2021. He was born on July 24, 1944 in Ogden, Utah. He was the youngest of 5 children of Earl and Willena Fielding. He was raised in Huntsville and as a young man, he enjoyed Junior Posse, jockeying for... View Obituary & Service Information

The family of Clyde M Fielding created this Life Tributes page to make it easy to share your memories.