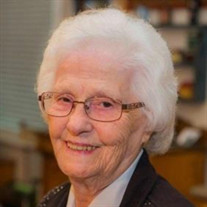 Colleen Dial Mott passed away peacefully on October 30, 2020 at her home in Lehi, Utah. She was preceded in death by her loving husband, Glenn Edward Mott. Colleen was born March 7, 1932 in Ogden, Utah. Her parents were Clessie Napoleon Dial and Altha Mathews Dial, and she has 2 older sisters and 3 younger brothers. When she was age 9, her family moved to Pleasant View, Utah to help her grandparents with the farm work. She loved milking cows and hauling hay. She rode a horse named Prince, who was a retired race horse. When she was 13 years old, her family moved to the Spokane, Washington area, living in the small town of Veradale in the Spokane Valley. She attended Central Valley High School, where she met her future husband, Glenn Mott. They married in 1951 and raised a family of 10 children. With her husband busily employed in managing an electrical contracting business, Colleen managed the home and joyfully tended to the many needs of her many children. She and Glenn were also faithful and committed members of the Church of Jesus Christ of Latter-Day Saints, and served together in many church callings and assignments. Colleen is best remembered by the many youth that she served as a dedicated seminary teacher and Young Women Camp leader. Colleen and Glenn moved to Utah in 1985 to open and manage the Frontier Pies restaurants, living in Ogden, Lindon, and Lehi. They also continued their church service in Utah, including service as ordinance workers in the Mount Timpanogos Temple. After retiring from Frontier Pies in 1994, Colleen and Glenn served two full-time missions together for the church – the first in Raleigh, North Carolina and the second in Fresno, California. Her last calling was greeting the Relief Society sisters each week, an assignment that she cherished and joyfully fulfilled. Colleen and Glenn’s posterity has grown to include 49 grandchildren, well over 100 great-grandchildren, and 3 great-great-grandchildren! Each of her grandchildren thinks that he or she was her favorite, and they are all absolutely right! Her service to her family is legendary, including the many family reunions where she planned the menus, bought the food, and directed the preparation of the meals. She also dazzled her children and grandchildren alike with her many talents, including her ability to break an apple in half with her bare hands, as well as her exceptional skills with the many board games that she loved to play and the jigsaw puzzles that she loved to assemble. Above all, her greatest skill was as a peacemaker, always showing love and kindness to everyone. A few years ago, in preparing instructions for her funeral service, she wrote at the top of the page “don’t be easily offended”. Good advice for one and all. In addition to her husband, Colleen was also preceded in death by her parents, a sister Devota, a brother Dennis, two grandchildren, Adam Mott and Scotty Ford, and two great-grandchildren, twins Emily and Malia Tanner. She is survived by her older sister Pauline Bastian and two younger brothers, John Richard (Dick) Dial and Dallas Dial. She is also survived by her 10 children, Terry (Lisa Demoney), Darcy (Jo Hudson), Greg (Marlene Sampson), Denise, Joe (Ellen Sampson), Cindy Alldredge (Jody), Aaron (Teresa Miller), Lisa Ford (Derin), Judy Simon (Brad), and Jon (Kim Southam) – as well as the grandchildren and great-grandchildren previously mentioned. Due to the Covid-19 pandemic, the viewing, funeral service, and burial will be private family gatherings. Following the funeral service, Colleen will be laid to rest in the Lehi City Cemetery. Funeral arrangements have been made with Premier Funeral Services, 1160 North 1200 West, Orem, Utah. 801.960.9150. Condolences can be sent to the family at www.premierfuneral.com.

Colleen Dial Mott passed away peacefully on October 30, 2020 at her home in Lehi, Utah. She was preceded in death by her loving husband, Glenn Edward Mott. Colleen was born March 7, 1932 in Ogden, Utah. Her parents were Clessie Napoleon Dial... View Obituary & Service Information

The family of Colleen Mott created this Life Tributes page to make it easy to share your memories.