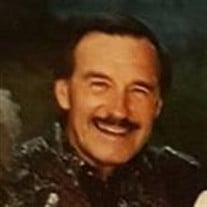 Cordell “Butch” Brown was born February 18, 1933 in Hyrum, Utah to Bert and Melva Brown. He died November 3, 2016 due to a vicious bout of Alzheimer’s disease. Married Marva Fitzgerald, July 14, 1953. They were married for 63 years. They had one son, Michael. Butch attended Utah State University earning a Master’s degree in Education and was an all-American basketball player for 3 years. He then served 2 years in the US Marine Corp. He became a school teacher and high school administrator in Las Vegas, Nevada, then moved back to Utah and sold insurance. He was an avid Jazz fan and was extremely outgoing, making many friends throughout his lifetime. Survived by his wife, Marva; son, Mike (Erin); grandson, Shane (Ashlee); two great-granddaughters, Finnley and Berkley, and sister, Dolly Martinsen. Preceded in death by his mother, Melva; father, Bert; brother, Court Brown, brother Buzzy Brown, and sister, Beverly Jorgensen. Graveside services will be held Tuesday, November 8th, 12:00 noon at the Draper City Cemetery, 12450 So. 900 E. Draper. In lieu of flowers the family requests donations be made to the Salt Lake County Animal Shelter. Adoptutahpets.com. On-line condolences may be left at www.premierfuneral.com.

The family of Cordell "Butch" Brown created this Life Tributes page to make it easy to share your memories.