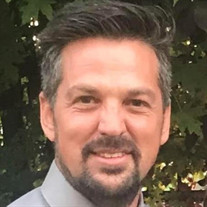 Corey Alan Bluemel (46 of Sandy Utah) passed away unexpectedly yet peacefully on Tuesday, November 9, 2021 from complications due to acute pancreatitis. Corey was born August 2, 1975 in Salt Lake City, Utah to Shauna Lou and Reynold D. Bluemel. Growing up Corey loved playing basketball and wrestling. His mother helped instill his love for scouting and he was an Eagle Scout. Corey graduated from Skyline High School in 1993 after which he served an LDS mission in Connecticut. Upon his return Corey went to school at the University of Utah and met his wife, Cynthia Kay Wright during her last year of high school on a blind date. They married on August 24, 1996 in the Jordan River Temple in South Jordan Utah. Once married, he took up motocross and enjoyed desert racing with his brother Chuck. Corey supported his girls and wanted them to find their own passion and interests, encouraging things like dance, tumbling, theatre, art, singing, ceramics, basketball and soccer. In 2006 he started coaching and playing soccer for the first time so he could coach his girls and learn the game himself. That started his 12 years coaching girl soccer for Utah Avalanche and Sparta United, something he really loved. Corey learned from being a dad of all girls how different each one was and was able to motivate and bring out the best in each person he coached. He understood he wouldn’t always be the coach but he wanted each player to be the best they could be! Corey went back to school and got his Bachelor’s Degree of Economics in 2007 because education was important to him. He taught his girls that they could do anything they wanted, and not to let being a female make you feel like less in any way - “Girl Power!” In 2008 Corey started his own manufacturers rep business, MBT Group Inc, and worked over 21 years in the electrical and telecommunication industry, being able to coach with his flexible hours. Corey devoted his time in the LDS Church to the Young Men’s organization as he had great examples growing up. He loved teaching the Scouting Program and being with “his boys” each week for years, making sure they earned their merit badges like his mother taught him. He was in the Elders Quorum presidency for eight years, during which he made sure to make it a “neighborhood event” not just a “ward event” so everyone would feel welcome. He spent many hours with his wife and girls giving service to others and was always available when anyone needed help -- from moving to raking leaves, Corey was always lending a hand. Corey’s father taught him how to work with his hands and he was able to do anything: around his yard he relandscaped several times, worked on his vehicles, it didn’t matter what needed done, Corey could do it all. Corey loved building things which was evident in his house and yard. Corey enjoyed the outdoors and enjoyed camping with his family in places like Coalville, Lyman, Montana, Yellowstone and Canada. Corey liked boating, target shooting at Five-Mile, deer and elk hunting in Fairview, hunting for pigs in Southern Utah, fishing at Little Lyman Lake and in Ennis. Corey shared his love of hiking with his girls as they did weekly family hikes as well as the Subway in Zion. In 2018 they adopted their youngest daughter, Clara Elizabeth, adding one more daughter into his estrogen filled house. In 2019 Corey and Cindy married Elizabeth Claire in a beautiful ceremony on the beach in Punta Cana with all their kids. The Bluemel’s rounded out their rambunctious bunch of kids with Jade, Liz’s daughter. Corey enjoyed the time he was able to spend with family on car rides, camping trips, flights and college visits. As his girls grew older, they introduced him to great men, Jacob, Tyler and Braiden all of whom he loved as if they were his own sons. He had an overwhelming amount of love in his heart for anyone who wanted or needed it and he will be greatly missed! Corey is preceded in death by his parents, Reynold D. Bluemel, Shauna Lou Lloyd, and pets Max, Sassy and Lacy. Corey leaves behind his wives Cynthia Kay Bluemel and Elizabeth Claire Bluemel and kids Ashley Ann, Emily Christine, Kylee Kay, Hannah Sierra, Jade Mckenna, Clara Elizabeth, and his honorary sons Jacob, Tyler and Braiden. Siblings Mariette (Tyler), Jack (Marianne), Natalie, Ren (Sherry), Chuck (Missy), Cam (Sam), Chris (Katie), and Heather (Todd). In-laws Shelley and Barbara Wright, Dodd Greer, Margot Greer, Jon (Kim), Becky (Alan), Katie (Steve), David (Jenny), Jesse (Heather), Mark (Loura), Chris (Jenn), Steve (Hailey), LeeAnna (Zach), Chris (Karen), Nicole (Lance), Eric (Brooke), Annie (Cody), Phil (Tamari), and many cousins, nieces and nephews. We will be having a Memorial Open House Saturday, November 13, 2021 5pm-7pm at Premier Funeral Services, 67 East 8000 South, Midvale Utah. After Corey is cremated, we will hold a Celebration of Life Friday December 17th with immediate family. Financial contributions can be made at GoFundMe https://gofund.me/8ce01d9b or Venmo

The family of Corey Alan Bluemel created this Life Tributes page to make it easy to share your memories.