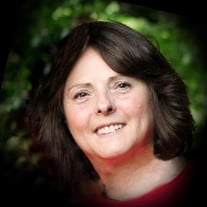 Corin Kay Curtis Hall On October 22nd, 2018 while surrounded by her earthly family Corin Hall peacefully slipped through the veil and was greeted on the other side by family members who had gone before. Corin's passing was brought on by an extended illness of Alzheimer's that took her from her family a little bit at a time. Even though her passing was sad for those she left behind, she was greeted joyously by her two sons Jerimie Robert and Jay Rowley, her father and mother, Rowley and Betty Curtis and her in-laws Jay and Beth Hall who preceded her. Corin was born on September 27th 1956, the oldest child of Rowley and Betty Curtis. Corin attended school in Springville, Utah where she graduated from Springville High School in 1974. Even though it was out of her comfort zone she tried out for and made the Springville High Drill team. She later attended Utah Valley Community College where she earned a one year certificate in Early Childhood Education. In the summer of 1976 she met Robert Hall. After an on-again off-again relationship they were married in the Provo, Utah LDS Temple on March 17th 1978. They are the parents of seven children. And proud Grandparents of twelve grandchildren. Children: Ralph (Nathaly) Hall, Jerimie Hall, Jay Hall, (both deceased), Nicole (Brian) Child, Bruce (Lorynn) Hall, Jason Hall, Leland (Edwige) Hall. Grandchildren: Emma Child, Alanis Hall, Channing Child, Bella Hall, Alysa Child, Kapree Hall, Jamison Hall, Ethan Child, Brettly Hall, Samantha Hall, Thomas Hall, and Naweza Hall. In her life, Corin worked several jobs but she was really passionate about children. She worked as a seamstress sewing children's clothes. She owned and operated an in-home child care center for over 12 years, and along with her husband she owned and managed a pizza and sandwich shop for two years. She also worked as a customer service representative for over fourteen years before becoming a full time grandma. In her church service she held several callings: primary teacher, Cub Scout leader, door greeter, counselor in a primary presidency, librarian, and her favorite calling was nursery leader. She also served as an ordinance worker in the Provo, Utah Temple for three years. She really loved serving in the Temple. Corin is survived by her husband Robert Hall, her children and grandchildren, and her sisters and brothers: Nan (Paul) Black, Chad (Janene) Curtis, Brent Curtis, Taunya (Randy) Bellew, Jesse (Dianne) Curtis, and Jenny (Paul) McElligott. Funeral services will be held Tuesday, October 30th 2018 at 11:00am in the Page LDS ward chapel. 711 S. 600 E., Payson Utah. Viewings will be held on Monday October 29th, 2018 from 6:00 to 8:00pm and Tuesday October 30th, 2018 in the Page LDS building. Burial will be at the Payson City Cemetery, 805 East 400 South, Payson, Utah.

Corin Kay Curtis Hall On October 22nd, 2018 while surrounded by her earthly family Corin Hall peacefully slipped through the veil and was greeted on the other side by family members who had gone before. Corin's passing was brought on by an... View Obituary & Service Information

The family of Corin Kay Curtis Hall created this Life Tributes page to make it easy to share your memories.