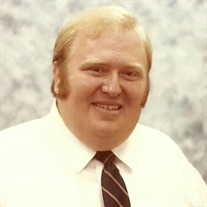 Our beloved father, grandfather, son, brother and uncle passed away Sunday afternoon in North Salt Lake, UT. Cornel was born and raised in Provo, UT. He graduated from Brigham Young University with a Bachelor’s in history and a Master’s in library science. He was an active and faithful member of the Church of Jesus Christ of Latter-Day Saints and served in the England Central Mission from 1971-1973. He served in many callings over the years but spent the majority of his time as a stake or ward clerk, a calling which he loved. He married the love of his life and eternal companion, Gretchen Miller, on August 25th, 1978 in the Manti Temple. Cornel & Gretchen were joined by a son, Cornel Jr., on August 16, 1985. Cornel had the opportunity to live and work as a librarian and library director in many places including but not limited to Arizona, Colorado, Nevada, Alaska and most recently in Duchesne, UT where he was the county library director. Cornel will be remembered for his love of books and movies, his storytelling, writing letters and his very recognizable laugh. He loved to spend time with friends and family and loved little children especially his granddaughters, who he spoiled until the day he died., He is survived by his son Cornel Jr (Cindy), the joys of his life (his granddaughters) Ava and McKenna, his beloved mother Shirley Thomas, his brother Ryan (Ann) Thomas, his sister Angie (Stuart) Hinckley and 13 nieces & nephews. He is preceded in death by his wife Gretchen Miller Thomas, his father Robert Thomas and his nephew Sean. Friends and family are invited to funeral services which will be held on 11:00 am, Saturday, January 2nd, 2016 at the LDS church building at 875 Foxboro Drive, North Salt Lake, UT. A public viewing will be held directly before the service from 9:15 am to 10:45 am. Interment will be at the Logan City Cemetery at 2:30 pm In lieu of flowers, contributions can be made to the family to help with funeral expenses.

Our beloved father, grandfather, son, brother and uncle passed away Sunday afternoon in North Salt Lake, UT. Cornel was born and raised in Provo, UT. He graduated from Brigham Young University with a Bachelor&#8217;s in history and a Master&#8217;s... View Obituary & Service Information

The family of Cornel Wilkes Thomas created this Life Tributes page to make it easy to share your memories.