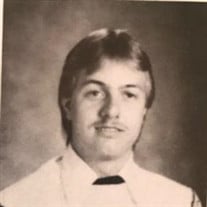 Craig Dee “MacIntosh” Alldredge For the past several weeks the earth has shuddered and trembled at the thought of losing one of the most courageous people to have ever walked its face. Craig Dee “MacIntosh” Alldredge finally lost his titanic struggle against multiple health issues on the beautiful spring morning of April 17, 2020. He was 54 years old. Craig was welcomed into this world on a cold snowy evening of November 11, 1965 in Salt Lake City, Utah, to loving new parents Dee W. and Elizabeth (Betty) Alldredge . His early days were spent in Fort Union, just two houses way from grandparents Phillip and Maggie Alldredge. Grandpa Phil loved nothing more than picking up little Craig and taking him on car rides. His destiny as the world’s greatest big brother came to fruition when Andrea was born and again when Robert came along. It was further cemented when Heather joined the family. There was not a thing that he wouldn’t do for his siblings. The majority of his life was spent in Midvale, Utah, attending Midvale Elementary and Junior High (where he played trombone in the school band and performed with Mr. Johnson’s Russian Dancers), and Hillcrest High School. Craig truly loved and cherished the Midvale of his youth and memories of growing up there: 9th ward activities and scouting camping trips, Senior League Baseball, street football on Darin Street, cold winter nights sledding behind Doug’s truck around the neighborhood and long summer days spent with his friends amongst the trees of the forest of Ossandria (his Neverland). His favorite vacation spots were Mill Hollow with family and friends, where everyone was invited and Disneyland with his kids, But Christmas spent with his family was Craig’s all time favorite. Craig was most proud of his Scottish Heritage instilled in him by his Nana, Margaret. He was convener for Clans MacIntosh and Chattan and won multiple awards for best clan at Scottish festivals from Salt Lake City to Grand Junction, from Payson to Estes Park. He served faithfully on the executive boards of Utah Scottish Association and St. Andrew’s Society of Utah. He married Jodie Horan in Salt Lake City, Utah in 2001. They were blessed with two wonderful children, Cameron and Kendall, of whom he was immensely proud . He is survived by his wife, and children, Midvale. Parents, Dee W. and Elizabeth (Betty), Midvale. Sisters Andrea Seifert (Roger), Bountiful, and Heather Mueller (Adam), Sandy. Brother Robert (Jacqueline), Salt Lake City. Nephews and Nieces: Chase Alldredge, Shad Alldredge, Shona Peck, Calum Seifert, Aiden Seifert, Connor Alldredge, Liam Carr, Afton Carr and Aislyn Seifert, all whom he adored and they adored him in return. His many Aunts, Uncles and Cousins and His lifelong friends Doug Austin, Shane Gord and Ed Lombard. Preceded in death by grandparents Phil and Maggie Alldredge and Robert and Margaret Fisher. Due to the COVID19, an intimate, immediate-family ceremony will be held. A celebration of Craig’s life will be held at a later date TBD. In lieu of flowers, please consider a donation in his name to the Payson Scottish Festival or the Utah Scottish Association. Special thanks to Dr. Phil Isenberg, U of U HealthCare for your caring and compassion and to Aspen Ridge Home Health and Hospice.

The family of Craig Dee Alldredge created this Life Tributes page to make it easy to share your memories.

For the past several weeks the...