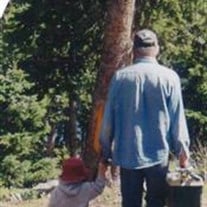 Craig Melvin Kramer 63, passed away peacefully at his daughters home in the arms of his daughter Cheryl and wife Irene, on December 3, 2013. Craig was surrounded by immediate family members who loved him with all of their hearts. Craig passed away due to Pancreatic Cancer, and other health issues related to a heart attack in 2004. Craig was born to Melvin Hyrum Kramer and Jean Larae Kramer on July 30, 1950 in Salt Lake City. He was preceded in death by both of his parents and his favorite dog and best buddy Paulie. Craig is survived by his wife Irene Kramer, and is four children Cheryl Lynn White (Lawrence) (Syracuse), Michael David Melvin Kramer (Kym) (South Jordan), Tamie Marie Sucese (Tim) (Salt Lake City), and ReNae Piltz (Chris) (West Valley City), 3 step children; Mary Blatnick, David Riley (Jamie) and Raymond (Lynn), 13 grand children and 5 great grand children. Craig is also survived by his 4 siblings Christine Morgan (SLC), Dr. David Kramer (St. George), Dr. Robert Kramer (Saratoga Springs) and Carol Sylvester (SLC). Craig attended Granite High School and Weber State College. Craig worked as a diesel mechanic and driver in his early adulthood. Later he was a DJ for several radio stations; Craig also was an adjunct professor at Weber State University teaching FORTRAN, C++, and COBOL. While working at WSU he setup their first computer lab. He taught at the University of HAFB and Steven Henagar’s College. He worked for REDCON at the Tooele Army Depot as a Computer Programmer. Craig was an amazing father to his children; he never stopped fighting for them and instilled in each of them the meaning of unconditional love. Our father hung the moon. He was a hero in the eyes of his children. He adored his grandchildren, and attended many of their little league games, as he cheered for them he didn’t care if his voice was the loudest, he was a proud grandfather and he was going to make sure everyone knew. Craig was a huge fan of the Denver Broncos. It was a rare occasion to see him without 1 of his many Broncos hats on his head. Craig taught his grandchildren his love of sports, and fishing. He loved going to Spirit Lake in the High Uintahs. His grandson Chase is his kindred spirit and would fish all day everyday if it were possible. Craig loved music; his favorites were Enya, Yanni and Kenny G. He enjoyed reading “Twas the Night Before Christmas” to his grand children every Christmas Eve. We are all devastated by his passing, yet so grateful he has returned to his Heavenly Home to his parents, grandparents, and best buddy. He is no longer suffering. Our Daddy’s desire was to be cremated and to have his ashes spread where he felt most at home, in the High Uintahs. He was certain that somewhere inside him he was a Native American Brother, and collected beautiful Eagle Statues. He is now spreading his wings and soaring above to protect us. A memorial open house will be held to celebrate his life on December 14, 2013 from 4 – 7 pm at the home of his daughter Cheryl White: 856 W 2985 S in Syracuse, UT. All are welcome to stop in and share a memory of our father. We love you sweet daddy, in our eyes you are the greatest man that ever lived. You hung the moon. Thank you to his wife Irene for giving him the love, loyalty, and dedication that he deserved, and a special thank you to Dignity Hospice for the respectful way you took care of our hero. Until we meet again daddy, we love you.

Craig Melvin Kramer 63, passed away peacefully at his daughters home in the arms of his daughter Cheryl and wife Irene, on December 3, 2013. Craig was surrounded by immediate family members who loved him with all of their hearts. Craig passed... View Obituary & Service Information

The family of Craig Melvin Kramer created this Life Tributes page to make it easy to share your memories.

Craig Melvin Kramer 63, passed away peacefully at his daughters...