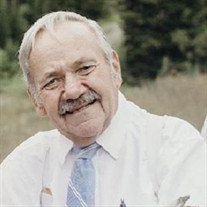 Craig H. Mortensen our loving husband, father, grandfather, great grandfather and brother returned home to his Father in Heaven on September 23, 2020 (his 51st wedding anniversary), surrounded by his family, following an accidental fall. Craig was born June 5, 1947 to Hugh A. Mortensen and Hartence LeFevre in Panguitch, Utah. As the oldest of 8 children including Mary, Garry, Paul, Phillip, Margaret, Steven, and Troy, he was blessed with a patient nature that continued throughout his lifetime. Craig served a mission for The Church of Jesus Christ of Latter-day Saints in the Eastern Atlantic States, where he spent most of his time in Philadelphia. Following his mission, he married Karen M. Larsen on September 23, 1969 in the Salt Lake Temple. Shortly after their marriage, Craig was drafted into the US Army where he served for nearly two years as a communications specialist, spending time at the Pentagon and Vietnam. It was during his service in Vietnam that the first of their 5 wonderful children arrived: Duane (Amy), Karrie (Greg), MaryAnn (Brian), Bryce (Becky), and Eric (Trisha). By trade, Craig was a skilled welder; he taught welding for the Salt Lake Community College and shared his passion for welding with his students, sons, and grandsons. Craig worked for Kennecott Copper for 30 years as a Millwright, and through this job was asked to teach welding to the people in New Guinea. His service there touched many lives and the experience stayed with him through his entire life. Craig was known to be a kind man and would help anyone he came across that was in need. He would give his last five dollars to a veteran down on their luck. He had a knack for knowing when someone was down and just what to say to comfort them. Hunting, fishing, and camping were some of his favorite ways to spend time with those he loved. Everyone was kid, punkin and sis to him. There were so many that were touched by his kind words, and his sharp sense of humor. He could find a joke in every situation and his clever wit will be greatly missed. As the years went by, Craig’s testimony of the Gospel grew enormously. He proudly served a service mission at the Humanitarian Center, and the Jordan River Temple. His example was a shining light to all who knew him. Our beloved Craig is preceded in death by his parents Hugh and Hartence, brother Steven, father and mother in law Earl and Helen Larsen, and brother in law Martin. He is survived by his sweetheart Karen, children, grandchildren Casey, Alex, Gabe, Taylor, Sam, Katie, Nate, Drew, Dylan, Jake, Hailey, Dani, Mac, Josh, Allie, Joey, Molly, Izzy, and great grandchildren Kai and Ben. The viewing will be held on Sunday, September 27th from 6:00-8:00pm at Premiere Funeral Services, 67 E. 8000 S. Midvale, UT. The family viewing will be held on Monday the 28th from 11:00-12:30 pm in the same location. The Graveside service will be at 1:00pm at Memorial Estates: 6500 S. Redwood Road, Taylorsville, UT. To watch the service live, go to the Premiere funeral services Facebook page, or join the Zoom meeting ID 482 436 0733 at 1:00pm.

The family of Craig H Mortensen created this Life Tributes page to make it easy to share your memories.