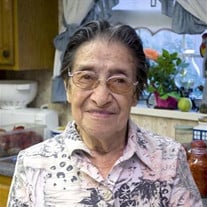 Cristina de Jesús Maldonado ended her earthly mission of nearly a century on December 1st, 2015, in Orem, Utah. "Mama Cristy," as she was affectionately known by all of her family and most others who knew her, was born in San Marcos, in a beautiful valley in the highlands of Guatemala, on December 5th, 1918. She was the daughter of Romualdo Maldonado and Ana María López. As the oldest of 8 children, she served her mother faithfully in the hard work of caring for a large family and dealing with the tragic loss of four siblings in infancy. Her brothers and her sister who reached adulthood, Jaime, Dagoberto, and Antonia, all preceded her in death. As a young widow with two very young daughters, Mama Cristy found the fullness of the Gospel of Jesus Christ, embraced its truths, and taught her daughters, who established a great posterity. Hers was only the second family in San Marcos, Guatemala, to join the Church of Jesus Christ of Latter-Day Saints. She was a pioneer of the faith in her homeland and a faithful disciple of Jesus Christ throughout her life. She was able to receive her temple ordinances in 1975 at the Mesa, Arizona temple, after a long and arduous journey by bus. Mama Cristy's family and friends will always remember her as a wise, loving, and giving person. Her wisdom was founded in broad and deep reading of the Holy Scriptures and pondering of their meaning, and in a temperament that was calm and lips that knew when to speak boldly, when to speak gently, and when to refrain from speaking. Her love was shown in every action and word, as she constantly gave encouragement to her children and grandchildren and served them ceaselessly. Words of malice or sarcasm never came from her lips: only words of love and trust in the Lord. Her service to family and to the Lord, at his Holy Temple, was ceaseless and tireless, for as long as her physical strength would allow. Our "Mama Cristy" is gone from our physical presence, but our spirits are bound to hers now and through the eternities. Cristina Maldonado is survived by her daughters, Edel Lambson and Norma Vineyard, her son-in-law Alan Lambson, by her grandchildren, David Vineyard, Joshua Vineyard, Jonathan Vineyard, Joseph Lambson, Christy Lambson Stephenson, Christy Vineyard Poole, Samuel Lambson, Michael Vineyard, and Nathan Lambson, and by their spouses and by 12 great-grandchildren, with another on the way. Her funeral will be held on Friday, December 4th, 2015 at the Canyon View Stake Center, 878 N. 530 E., Orem, at 12:00 noon Prior to the funeral, a viewing will be held from 10:00 to 11:30. a.m. The funeral will be followed by interment at the Orem City Cemetery, 1520 N. 800 E., Orem.

Cristina de Jesús Maldonado ended her earthly mission of nearly a century on December 1st, 2015, in Orem, Utah. "Mama Cristy," as she was affectionately known by all of her family and most others who knew her, was born in San Marcos, in a beautiful... View Obituary & Service Information

The family of Cristina Maldonado created this Life Tributes page to make it easy to share your memories.