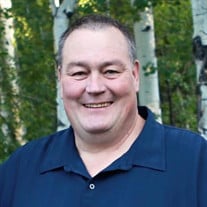 It is with sad hearts we announce the passing of Curtis Vernon Okelberry. On July 8th, 2021, we lost the greatest husband, Father, brother, uncle, and friend. On July 11th, 1960, Curtis was born in Rupert, Idaho, to Donald R. and Ramona Lee Okelberry. When he was five years old, his family moved to Camden, South Carolina, where he grew up and graduated from high school in 1978. He was a faithful member of The Church of Jesus Christ of Latter-day Saints and served in the Las Vegas, Nevada Mission. Curtis also served in many church callings, including Young Men's President, Scoutmaster, Ward Mission Leader, Bishopric, and on Stake High Councils. On August 30th, 1984, he and his sweetheart Lisa Ann Parker were married in the Salt Lake City Temple. They were blessed with a son, Benjamin Parker, on August 14th, 1993, who he adored. Curtis worked for Meadow Gold Dairy as a truck driver in Salt Lake City, Branch Manager in Vernal, Utah, and Eastern Idaho. He made many wonderful friends with coworkers and clients. Curtis worked for Advantage Transportation for the past 13 years. He loved working with his Father-in-law and his Brother-in-law. Some of his closest friends were the Advantage staff, fellow drivers, and clients. Curtis is survived by his wife Lisa, their son Benjamin, Sisters Donetta Okelberry, Lydia Potter, Pamela (Rod) Hatton, and Brother Denton Okelberry. Also survived by his Father and Mother-in-law, Wayne and Linda Parker, brothers and sisters-in-law, and many nieces and nephews, who he loved dearly. He was preceded in death by his sweet parents Don and Ramona, a brother-in-law, and a niece. A viewing will be held on Saturday, July 17th, from 9:00 AM to 10:30 AM, followed by the funeral at 11:00 AM at the Sandy Utah Lone Peak Stake Center. 11570 Wasatch Blvd, Sandy, UT, 84092 Interment will be at Elysian Burial Gardens. 1075 E 4580 S, Millcreek, UT, 84117 The funeral will be under the direction of Premier Funeral Services-Salt Lake City. www.premierfuneral.com "Link to YouTube live video of the funeral." https://www.youtube.com/channel/UCW3yQBSFDYJRrsqilvXT74g

It is with sad hearts we announce the passing of Curtis Vernon Okelberry. On July 8th, 2021, we lost the greatest husband, Father, brother, uncle, and friend. On July 11th, 1960, Curtis was born in Rupert, Idaho, to Donald R. and Ramona Lee... View Obituary & Service Information

The family of Curtis Vernon Okelberry created this Life Tributes page to make it easy to share your memories.

It is with sad hearts we announce the passing of Curtis Vernon...