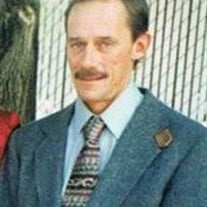 At 1:28 a.m. on Wednesday, September 5th, our loving husband, father and brother, Curtis Allen Robinson, went to be with the Lord. Curtis was surrounded by family and friends who cared for him as he passed away in his home after a long battle with illness. Curtis was born in American Fork, Utah on July 17, 1958 to Frank Allen and Geraldine Ann (Beverly) Robinson. Curtis grew up camping, hunting, fishing and boating with his family. Most weekends as a child were spent at Charlie’s Trout Creek on Strawberry Reservoir where he often worked as a boat launcher, launching boats with a tractor for fishermen. Curtis loved to figure out how stuff worked and would often be found in his room or in the garage taking things apart and putting them back together. Curtis loved pheasant hunting, working on cars, and was an avid NASCAR fan. His favorite family activities were camping at the family property on Pinion Ridge, hunting, boating, golfing and rebuilding engines with his sons, Nathan and Zachary. His first job was as a meat cutter for Maxfield’s Meats. He later attended Utah Technical College and became a certified welder. His first job out of college was with Mountain States Steel. He had the dream of owning his own welding business, which he achieved. He owned and operated General Maintenance in Pleasant Grove and grew it into a lucrative business which he was forced to retire from due to his illness. Curtis had a zest for life and lived each day with passion. He loved his friends and family and never let a day go by without saying so. He had a warm smile and a distinctive laugh which touched the hearts of many. He is survived by his wife, Brenda J. (Lewis) Robinson of American Fork, Utah; Daughter, Korlee Alice Robinson of Albuquerque, New Mexico; Sons, Nathan D. and Zachary A. of American Fork, Utah; Brother, Gary Odell Christensen of Erda, Utah; Sisters Nola Gail (Christensen) Middleton of Beaver Dam, Arizona; Bonnie Jo (Robinson) Rowley of Beaver Dam, AZ and Lori Dawn (Robinson) Maximenko of Loveland, CO. He is preceded in death by his father, Frank Allen Robinson and mother, Geraldine Ann (Beverly) Robinson. At 12:30 PM on Saturday, September 8, a Memorial Service will be held at the Mt. View Christian Assembly Church, 300 East 8000 South Sandy, UT 84070. A viewing will be held from 11:00 a.m. to 12:30 p.m. and a Celebration of Life Service will immediately follow. In lieu of gifts and flowers, please send a donation to the National Kidney Foundation of Utah, 3707 North Canyon Road, Suite 1D, Edgemont Professional Plaza, Provo, UT 84604-4585 or donate online at www.kidneyut.org. Please note Curtis’ full name with all donations. Curtis, we mourn because we will miss you. “Weeping may endure for a night, but joy comes in the morning.” Psalm 30:5

At 1:28 a.m. on Wednesday, September 5th, our loving husband, father and brother, Curtis Allen Robinson, went to be with the Lord. Curtis was surrounded by family and friends who cared for him as he passed away in his home after a long battle... View Obituary & Service Information

The family of Curtis Allen Robinson created this Life Tributes page to make it easy to share your memories.