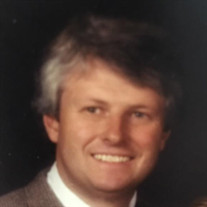 Dennis “Paul” Winston Collins 1946 - 2016 Dennis “Paul” Winston Collins passed away at the age of 70 on December 28, 2016 surrounded by family at home in Lindon, Utah from Renal Cancer. Paul was the husband of Dalene Dixon Collins and together they shared 45 wonderful years of marriage. Born in Lower Chaddesley Corbett, England on May 4,1946 he emigrated with his family to the United States in 1948 where they eventually settled in Orem, Utah. Paul was the son of Dennis French Collins and Edith Thomas Collins. He attended Orem High School and graduated from Brigham Young University with a Bachelors of Science in Psychology. He received his Masters in Human Resource Management from the University of Utah. Paul served the Utah National Guard from 1965 - 1971. He met his wife Dalene while attending BYU and they were married in 1971 and had two daughters, Sydney and Heather. He worked in various positions within Utah State Government, notably the Department of Agriculture under Governor Scott Matheson and most recently as the Program Director at the Department of Adult Probation and Parole in Provo. In 2004 he retired after 33 years of service. Paul had many passions including cars and he loved the Porsche Speedster in particular. He studied, bred, raised and trained Arabian horses and had an encyclopedic knowledge of bloodlines and horse conformation which earned him a reputation as an expert on the subject. He and Dalene shared this passion and together they attended the Scottsdale Arabian Horse Show in Scottsdale, Arizona yearly for 42 years. He was well traveled and loved hopping in the car for a road trip as well as hopping a plane to Russia, Italy, Poland, England and France though home seemed to be his greatest destination. Paul enjoyed the close proximity of his home to Provo Canyon and spent time exploring the beauty of the area by car, foot, bike & horseback. Over the years he designed two beautiful homes he and his family resided in as well as designing and building the barns and pastures at his horse farms which stand today as part of his legacy. He possessed a photographic memory and an uncanny ability to recite facts about any topic he was interested in from sports to history, current events to geography. Happiness to Paul was as simple as a lunch outing with his family & friends catching up and telling stories or a scenic drive while listening to The Rolling Stones. He will be remembered as a loving husband, father, grandfather, brother, uncle and friend. Paul was a thoughtful provider who always put his family first and foremost. He was strong, tender, sturdy and reliable and always there for those in his life. Paul was a man who cared deeply and loved with all of his being. Paul is survived by his wife Dalene Dixon Collins; daughter Sydney Collins Hansen; grandchildren Simon Kessler, Madison Christensen Massey (Garth) and Kaleb Christensen; siblings Martin Collins (Marisa), Alvin Collins, Susan Collins Long and Jeffrey Collins (Melanie). He is preceded in death by his parents Dennis French Collins and Edith Thomas Collins; siblings James Collins and Michael Collins and his beloved daughter Heather Collins Pomo and son-in-law Eric Stephen Pomo. Funeral services will be held on Monday January 9, 2017 at 11:00 am at the Lindon West LDS Stake Center located at 250 West 600 South Lindon, Utah 84042. A viewing will be held from 9:30 -10:45 am prior to the funeral service. Interment at the Lindon City Cemetery. Flowers may be sent to the Stake Center prior to the funeral service. “At the end of life, what really matters is not what we bought but what we built; not what we got but what we shared; not our competence but our character; and not our success but our significance. Live a life that matters. Live a life of love."

The family of D Paul Collins created this Life Tributes page to make it easy to share your memories.