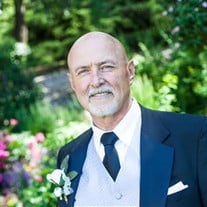 D. Scott Nuttall 1953 - 2017 D. Scott Nuttall, 64, devoted husband and father, dedicated follower of Jesus Christ, and master builder, passed away surrounded by family on July 19, 2017 in his Springville, Utah home due to congestive heart failure. He was born April 30, 1953, in Provo, Utah to Douglas Koyle and LaVon (Rasmussen) Nuttall. He graduated from Provo High School, attended BYU, and served two years as a missionary for the Church of Jesus Christ of Latter Day Saints to Scotland in 1972-1974. He married Winifred Turley in 1974 in the Salt Lake Temple and together they had six children. They were later divorced in 2003. In 2013 Scott married Jill Cowden Keith. They were sealed on June 13, 2015 in the Payson Utah Temple. At the age of 22, Scott was one of the youngest licensed building contractors in the state of Utah. For more than 40 years he utilized his remarkable gifts of woodworking to build many outstanding custom homes as well as commercial projects that reflected his commitment to quality. Scott mentored many young men who worked for him, teaching them not only construction skills, but more importantly, life skills. His most cherished project was overseeing the finish wood carpentry installation in the Provo City Center Temple. He was able to have his wife, Jill, and two of his sons, Michael and Eric, join him in the process of repurposing the much beloved Provo Tabernacle into an exquisite temple. He was honored to have this opportunity and to leave such a unique and lasting legacy to his posterity and the people of Utah County. Preceding his passing, Scott was grateful for the opportunity to share his testimony with many visitors centering on those things that are truly most important in life. He had a strong and abiding testimony of Jesus Christ and the Book of Mormon that he loved to share with others, especially the youth. Scott possessed a wonderful sense of humor and will be remembered for his contagious laugh and sparkly mischievous eyes. Over the years Scott pursued many hobbies and interests. He especially loved creating great memories while camping, snowmobiling and boating with his family. Scott adored his wife, Jill, and treasured his relationships with the eleven children they share. He is survived by his wife, Jill, and his children Kellie (Brent Eddy), Matthew (Mandi) Nuttall, Allison (Tyler Denboer), Eric (Kim) Nuttall, and Michael (Mary) Nuttall, along with Jill’s six children Todd Keith, Shannon Mortier, Tasha (Rich) Nicholls, Tyler Alaia Keith, Nathan (Stephanie) Keith, Tanya (Joel) Johnson and 34 grandchildren; his mother LaVon Nuttall, siblings Christine (Clint) Williams, Brent Nuttall, Boyd Nuttall, and Reed (Karen) Nuttall, as well as many nieces and nephews. He was preceded in death by his infant son, Daniel, and his father, Douglas K. Nuttall. Although we are saddened he has left us much too soon, we find great peace and comfort in the Gospel of Jesus Christ, knowing that families can be together forever as we strive to learn and live our Heavenly Father’s perfect Plan of Salvation. Funeral services will be held at 11:00 a.m. Saturday, July 22nd 2017 at the Church of Jesus Christ of Latter Day Saints chapel, 355 East Center Street, Springville, Utah. The viewing will be held prior to the funeral service on Saturday, July 22nd from 9:00 to 10:45 p.m. Interment will be at the Provo City Cemetery. The family expresses gratitude to the many physicians, medical staff at Utah Valley Hospital, Intermountain Hospice, and Premier Funeral Services of Orem, Utah for their excellent care. In lieu of flowers, the family suggests contributions to the LDS Missionary Fund.

The family of D. Scott Nuttall created this Life Tributes page to make it easy to share your memories.