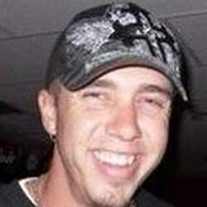 D.J. Shupe was born May 3, 1983, the third child of Doug Shupe, wife Sue and Sheila Williams, husband Steve Williams. He enjoyed his life to the very fullest until his passing on February 22, 2015 when he joined his 2 grandpas and 1 grandma. He was the brother to 3 sisters and 1 brother, Jamie Harward, Tiffany Herrera, Brooke Williams, and Ryan Williams. He left behind 3 beautiful children and their mom's, Mykah Shupe and Becca Mullford (mom), Tessa Shupe and Sami Shupe (mom), Ashton Shupe and Angie Solt (mom), and 5 nieces and nephews and one on the way. D.J. graduated Taylorsville High School where he met and grew up with “The Boys,” Jason (polar bear), Nate, Mitch, and “Mexican” (Josh). Once they graduated, they all moved in together where, well….lets just say, they had a blast. Later, D.J. met Becca Mullford and together they had Mykah. He then was introduced to Sami Bateman. They were married on October 1, 2005. Then they have birth to a beautiful little girl named Tessa. They later divorced. He then met Angie Solt and together they had a handsome baby boy, Ashton. He was also a wonderful father figure to Angie's 3 kids, Max, Nessa, and Anna. D.J. was a kind hearted person that would do anything for anybody. He was close to his family and was always trying to be the peacemaker. He had a very contagious smile and made everyone laugh. He could start a conversation with a total stranger and instantly become friends. He was loved by everyone who came in contact with him. D.J. touched more lives than he knew. He loved to hike and swim. He enjoyed the mountains, beach, and of course spending time with his children and nieces and nephews. Whenever he had a struggle in life, his first stop was the canyon. D.J. was a warm friendly person who definitely made his mark in the world, not with grand gestures or fancy titles, but by the basic goodness and generosity of his character. He had many wonderful aspects to his life and many ways he touched each and every one of our lives. D.J. will be remembered as a wonderful father, son, brother, generous uncle, cousin and a great friend. Now that D.J. has passed away, of course there is emptiness and pain, confusion and maybe even anger. In many ways, the gift of D.J.’s life is still here with us. He was a donor and his last gift to the world was his heart, which went to a recipient here in Utah, his 2 kidneys which were split and given to 2 different recipients in Utah as well. His liver is going to a recipient in California where he loved to walk the beach. He will live on in our memories, stories and of course through his 3 wonderful children. Today, tomorrow and in the years to come, our memories and stories will keep the gift of D.J. alive. D.J's countless friends and family members are invited to his funeral services 10:00 am, Friday, February 27, 2015 at Bennion 4th Ward, 6250 South 2200 West, Taylorsville Utah. The social gathering will be prior to services from 10:00 to 11:00 a.m., at the church. Interment and dedication of his grave at Mount Olivet Cemetery, 1342 East 5th South, SLC, Utah . We will then return to the church for a luncheon. In lieu of flowers, there has been an account set up through Mountain America Credit Union for D.J's three children under his name.

D.J. Shupe was born May 3, 1983, the third child of Doug Shupe, wife Sue and Sheila Williams, husband Steve Williams. He enjoyed his life to the very fullest until his passing on February 22, 2015 when he joined his 2 grandpas and 1 grandma.... View Obituary & Service Information

The family of D.J. Shupe created this Life Tributes page to make it easy to share your memories.