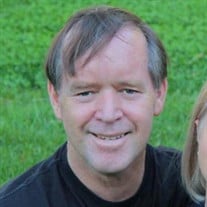 Dale Eugene McKenna departed this life on July 10, 2020, surrounded by loved ones in Orem, Utah. Dale was born May 2, 1951 in Yankton, South Dakota to Howard Eugene McKenna and Ruth Annabelle Stortvedt. Raised in Saratoga, California, he was the third of seven children. Dale grew up loving athletics and family activities. He began working at age 16 and he always worked hard. His career was in Auto Body and Paint. He was a member of the Army National Guard from 1970 to 1976, and he joined The Church of Jesus Christ of Latter-day Saints in 1972. He married Jane Ellen Tallmon on June 2, 1972 and they were sealed in the Oakland California temple on their first anniversary. They started their family in California and moved to Orem, Utah in 1980, and it seemed they finished their family with seven children. But in 1992 they adopted seven of their nieces and nephews, making a total of 14 children. Dale had the biggest heart in the world and played with all of his kids and their friends. He especially loved wrestling, hunting and fishing, and playing football with them. He also loved music, singing and writing songs, and playing the guitar. Dale was preceded in death by his parents and two granddaughters, Taleah English and Tabitha English. He is survived by his wife, Jane, his children John (Monica), Sarah (Jared), Allison (Richard), Jacob (Shelli), Jordan (Amy), Melody (Kevin), Cameron (Brenda), Kelly (Brett), Gavin (Mandy), Jason (Jessica), Sharmon (Landon), Austin (Melina), Jeff (Ariel), Jennifer (Russel), and over 50 grandchildren and 2 great- grandchildren. He was a fantastic husband, father, hero, and friend, and will be greatly missed by all of us. His memorial service will be on July 15th in Orem, and limited to 50 family members due to the Covid-19 restrictions. However, the event will be live-streamed on Facebook: Dale McKenna Celebration of Life. Interment will be at the Orem Cemetery. Comments and condolences can be sent to www.premierfuneral.com.

Dale Eugene McKenna departed this life on July 10, 2020, surrounded by loved ones in Orem, Utah. Dale was born May 2, 1951 in Yankton, South Dakota to Howard Eugene McKenna and Ruth Annabelle Stortvedt. Raised in Saratoga, California, he was... View Obituary & Service Information

The family of Dale Eugene McKenna created this Life Tributes page to make it easy to share your memories.