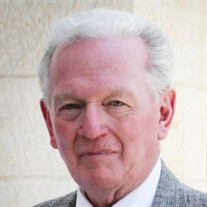 Dale Douglas Nelson, born October 2, 1939 in Santaquin, Utah, to Hyrum McClain and Estella Smith Nelson, passed away surrounded by his wife, children and grandchildren on November 17, 2020 in the home he built with his own hands forty five years before in Orem, Utah. Dale was raised on his Father's farm in Genola, Utah before moving to Idaho Falls, Idaho in 1951. He graduated from Bonneville High School in Ammon, Idaho, and then served in the Northern States Mission for the Church of Jesus Christ of Latter-day Saints. Following his mission he attended Brigham Young University where he had the good luck of giving a ride back to Idaho Falls for Thanksgiving to a girl named Annalee Cook. They were married a few months later on, June 14, 1963 in the Idaho Falls Temple. He graduated from Brigham Young University on August 17, 1967 with a Bachelor of Science in Industrial Arts Education. Over the next two decades Dale and Annalee were blessed with six sons and two daughters. Through his professional career Dale worked as an educator, general contractor, and small business owner. He was a faithful member of The Church of Jesus Christ of Latter-day Saints his whole life, serving in a variety roles including various bishoprics, and youth organizations. Dale had a love of music and enjoyed sharing his beautiful tenor voice with family, friends and church choirs. He dedicated his life to selflessly serving family and friends. In his spare time he could commonly be found fixing cars and doing home repairs for anyone who needed it. He was an excellent craftsman and enjoyed building furniture and toys for his grandchildren, and teaching his children these skills. After suffering a debilitating stroke on January 28, 2009 he had great difficulty walking, thinking and speaking, but never complained. Whenever asked how he was doing he always replied, “Just fine.” He continued to serve as a church greeter, always arriving early and shaking everyone's hand with a big smile. He continued to enjoy doing family history work and spending time with his family. He is survived by his wife, Annalee; children, Trent, Denton, Heather, Derek, Kimber, Cameron, Weston and Seth; sister, Joanne Brooks; 25 grandchildren and 5 great-grandchildren. A viewing will be held Saturday, November 21st from 9:30-10:30 am at the LDS Church on 891 W. 130 N. It will be followed by a private service for family only, due to COVID-19 restrictions.

Dale Douglas Nelson, born October 2, 1939 in Santaquin, Utah, to Hyrum McClain and Estella Smith Nelson, passed away surrounded by his wife, children and grandchildren on November 17, 2020 in the home he built with his own hands forty five years... View Obituary & Service Information

The family of Dale Douglas Nelson created this Life Tributes page to make it easy to share your memories.