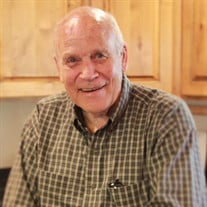 Loving husband and father Dale Eugene Skinner, age 84, passed away peacefully February 12, 2018 surrounded by his loving family. He returned to his Heavenly Father having valiantly completed his mission here on earth. Dale was born October 22, 1933 in Bingham Canyon, Utah to George and Eva Anderson Skinner. Dale spent his childhood in American Fork, Utah. He remembered his youth with fondness and often shared stories of days spent climbing trees and catching catfish. At the age of 13, Dale’s father George died in a coal mine accident. He did his best to help his mother raise his three sisters in the absence of their father. He served honorably in the United States Air Force during the Korean War as a cryptologist at bases in Greenland, Tokyo and Arizona. Later, he faithfully served his Heavenly Father on a three year LDS mission to Hong Kong. In 1962 he graduated from Brigham Young University majoring in History. On December 10, 1965, he married Linda Jean Nuffer for time and all eternity in the Salt Lake Temple. Together they raised a beautiful family of 10 children. He worked as a teacher in both junior high and high school. As a school teacher Dale was quite respected. Although he was known as a strict teacher, he was also quite popular. Several of his students said he was their favorite. He enjoyed learning and sharing that joy with others. He also enjoyed sharing the gospel. He and his wife Linda served LDS missions in Mongolia, Nebraska and Virginia. Dale was a man of faith, integrity and obedience. He served in many church callings including bishop and was always a good example. He desired to bring others to Christ in all that he did. Dale had a love of music and played the violin beautifully. He also had a witty sense of humor! Dale is survived by his wife Linda and their children Stephen (Kumi) Skinner, Brian (Marci) Skinner, Hyrum (Joy) Skinner, Rachael (Joel) Allred, Julie (Aaron) Jordan, Soon Hee (Jason) Haddock, James Skinner and Maralee (Todd) Saulters. He is preceded in death by a daughter, Paula and a son, Mark. He is also survived by his sisters Joyce Boley, Elaine (Dave) Smith and Karen (Larry) Bartholomew. Together with Linda he has 25 grandchildren and one great grandchild. His funeral services will be held 12:00 Noon, Thursday, February 15, 2018 at the Moroni Stake Center (82 North Center Street). A viewing will be held prior to the funeral at 10:30. A graveside service will be at the American Fork Cemetery following the funeral.

The family of Dale Eugene Skinner created this Life Tributes page to make it easy to share your memories.