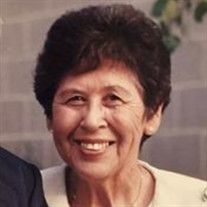 Dalila (Lela) McCurdy (Quotes taken from a life history Lela wrote) Lela was born at home in Sebastian, Texas on May 6, 1931 to Antonio and Maria Martinez. “They were wonderful parents.” She was the first of eight children. Her Dad had a large farm. “When the rain didn’t come, we didn’t get any crops and then we had hard times. We were very poor, but very happy.” Her father wrote about her childhood: “Dalila grew up very spoiled by us, her grandparents, and her great grandmother. Dalila grew to be a very sweet child (noble). She was a very good student She liked studying and reading all kinds of books. She was sealed to us as her parents along with her brother and sisters in the Mesa, Arizona Temple on the 18th of October, 1948.” In 1947, Lela was playing the piano at the Branch Christmas Party when she met her sweetheart. Charles was serving a mission and they eventually fell in love. Charles came back after his mission and brought a ring. “I knew and he did too that our love was great.” Charles and Lela were married on October 20, 1949 in the Mesa, Arizona Temple. Lela and Charles lived in Pocatello, California, Europe, and Utah. They were blessed to have five sons. They moved to Dugway and then settled back in their home in Cottonwood Heights. Lela made lifelong friends in every place they lived. Lela was a faithful member of the Church of Jesus Christ of Latter-day Saints. She served in many callings, and especially loved serving with her sweetheart in the temple. Lela was a devoted mother. She was always there to support her boys. She had a sweet way of making each son feel he was her favorite. She attended countless sporting events, cooked countless tacos and hamburgers, washed countless uniforms and dirty socks, and smiled countless proud smiles at her boys. She was an amazing grandma. It was common to see her blue VW bug pull up and unload 8 or more grandchildren (and a few dogs). She played with them, cooked for them, sewed with them, went bargain shopping with them, took them to stay in Dugway, and LOVED them. Delci said “Grandma was my best friend.” She had 25 grandchildren, 54 great -grandchildren, and 2 great -great grandchildren Lela’s family would like to thank Michael, Sandra, and their children for their loving care and devotion to Lela during the last years of her life. Even after Charles died, Lela could always feel his presence comforting her when she was in need. Lela was reunited with her sweetheart on December 31, 2021. We are grateful for the knowledge that families are forever. Survived by her sons, Carlos (Susie), Marteen, Rich (Beatriz), Tico (Tracy), Michael (Sandra); sister, Mary Martinez; brother, Tony M. (Marianne) Martinez, and many extended family and friends.

Dalila (Lela) McCurdy (Quotes taken from a life history Lela wrote) Lela was born at home in Sebastian, Texas on May 6, 1931 to Antonio and Maria Martinez. &#8220;They were wonderful parents.&#8221; She was the first of eight children. Her... View Obituary & Service Information

The family of Dalila Martinez McCurdy created this Life Tributes page to make it easy to share your memories.