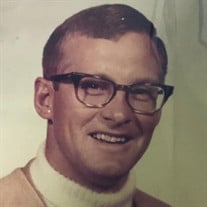 Dallas Eldon Freestone was born to Ida Vilate Crouse and Emery Lind Freestone on May 31, 1941 in Vernal Utah. He had a love for the area and his upbringing with his cousins were a highlight. He was baptized as a member of the Church of Jesus Christ of Latter-Day Saints, and loved the gospel, and its teachings dearly. As a youth, he moved to Provo, and graduated from Provo High School in 1959. He served a church mission in Germany and returned home early for untold circumstances. He continued to read his German bible long after returning home. He loved his country, and loved the Constitution of the United States of America, and revered his protected freedoms. Due to the physical condition of his feet, he was not eligible to be drafted into military service. After his mission, he started work for the Forest Service, and his work included surveying the trail everyone uses to hike to the top of Mount Timpanogos in Utah County. His employment always took him outdoors. He worked for Utah County as a surveyor. He experienced the hardship of the extreme elements of cold snow, and blazing heat. He was glad to retire as soon as he was able. He immersed himself in the work of family history. He was very proud of his work, and loved to create ordinance cards to be sent to the temple. He took on this legacy of preparing temple work from his mother’s long and exhaustive ordinance work in the Provo temple. He married Joyce Anderson on July 11, 1969 and adopted her daughter from a previous marriage, Juliet (1967). Their family grew quickly, and had 4 additional children in 5 years: Douglas Howard 1970, Bradley Dallas 1973, Jennifer Christine 1974, and Brian David 1975. Douglas’ sudden death in 1983 was particularly hard for Dallas, but his study of the gospel of Jesus Christ helped him to see blessings in his life. In 2003 he met Anne Lawrence. He was happy in a profound way and it and amazing in the eyes of his family. He treasured her with everything that he had. They were married on September 12 2003 in Goliad Texas. After Anne passed in 2016, the light within him began to diminish without her, and his zest for life waned. He succumbed to many illnesses, and passed away at his home on January 4th, 2020. He would be tremendously gratified and humbled to know that he will be buried with the remains of his beloved Anne. He was preceded in death by his wife Anne Lawrence (1933-2016), older siblings Melvin Emery Freestone (1928-2009, Spouse Anna Dee), Harold Don Freestone (1929-1995; LaRue Lewis), Dorothy Marie Roper (1931-2014; Bernard Glade Roper), Lois Rae Harness (1934-2011; Herbert Hoover Harness), and by his eldest son Douglas Howard Freestone (1970-1983). He is survived by his older brother Ernest (wife Pamela), older sister Doris Nielsen, daughter Juliet Cross and children Tara Sage, Tyler Morgan, Emily Brooke, Kaylee Lauren, Conner Corbett, his son Bradley Freestone married to Dianne Baird, with their children Abbey, Peyton Rhys, Ethan Stuart, and Aidan Bradley, Jennifer Stahura married to Jeffery Joseph Stahura, with their children Jeffrey Riley married to Maria Chavarri, Brianne Lynne married to Matt Crowder, Payton Christian, and McKay Austin, son Brian Freestone and his daughter Analise McKenzie Freestone. His loves included classical music, Beethoven was his favorite. He was a fan of The Dallas Cowboys regardless of their successes he was a true fanatic! He also cheered for, and screamed at the Utah Jazz, as a devoted fan as well. And he was always cheering for the Cougars of BYU, regardless of the sport, including a new found love of Women’s Soccer. He loved to converse with people about sports, genealogy and most of all, every one of his beloved grandchildren. He loved each of his grandchildren dearly. His most revered title he would ever allow to be bestowed upon himself was that of “Grampa.” He expressed his love for all of them endlessly. He would be most proud to know that his children are doing well and that their lives are happy.

Dallas Eldon Freestone was born to Ida Vilate Crouse and Emery Lind Freestone on May 31, 1941 in Vernal Utah. He had a love for the area and his upbringing with his cousins were a highlight. He was baptized as a member of the Church of Jesus... View Obituary & Service Information

The family of Dallas E. Freestone created this Life Tributes page to make it easy to share your memories.