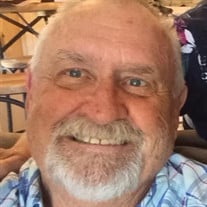 Dan William Allen 1947-2021 Dan William Allen was born July 3, 1947, in Salina, Utah, to Bill and Ruth Allen. He grew up in Spanish Fork, Utah and served an LDS mission in Palmyra, New York. He went to BYU where he met his beautiful wife, Colleen McCloy, in the International Folk Dancers group. They were married in the Salt Lake City Temple in September 1970 and went on to have eight children. Dan had a love for science and nature and had a long and successful career as an AP Biology teacher. He was known for having a classroom full of live animals including frogs, snakes, turtles, and Charlie, the fourteen-foot Burmese python. He also rescued many exotic animals from students and neighbors over the years. As a result, his home became a mini-farm with rabbits, goats, geese, chickens and a variety of pets including skunks, ferrets, a cockatiel and, of course, cats and dogs. He was a wealth of knowledge and was able to answer any question brought to him. He loved his summers and filled them with family adventures. There was river rafting, four wheeling, camping, fishing, hiking, and boating frequently. He could fix anything and could handle any amount of chaos with complete calm. His favorite sport was SCUBA diving. When he got the opportunity to hop in the ocean, you couldn’t get him out again. He was especially attached to Hawaii and enjoyed visiting his children there. Dan served in many callings in the Church of Jesus Christ of Latter-day Saints. He was a counselor in several bishoprics including at the Utah Correctional Facility (State Prison). He held many positions in the Young Men’s program and always enjoyed being around teenagers. Most recently he and Colleen taught a Temple Preparation Class in Sunday School. They also served a mission from home, teaching English in West Valley to those who wanted to learn and enjoyed serving at the Oquirrh Mountain Temple as ordinance workers. One of the highlights for Dan and Colleen was serving a mission to Singapore where they were assigned to be humanitarian directors in East Malaysia on the island of Borneo. LDS Charities partnered with local Muslim charity organizations, bringing wheelchairs, clean water, new school restrooms, assisting the blind and deaf with needed equipment, and building the first flushing toilet house on the remote island of Pulau Bungi. Though Dan towered over the gentle people of Malaysia, he was completely at home surrounded by an ocean in the middle of a tropical rain forest! Dan’s ability to walk decreased as pulmonary hypertension took its toll, but as long as he had wheels under him, he could manage anything. His children generously provided an electric Jazzy and an E-Trike which gave their Dad life again! They also accompanied him as he went fishing in his one-man inflatable pontoon, loaded with oxygen tanks and every fishing gadget he could get his hands on. Dan passed away on December 26, 2021 after battling pulmonary hypertension. He never looked back, instead faced the future with acceptance and a drive to live each day to the fullest. Preceded in death by daughter, Heather Allen, and grandson William Dobruck. Survived by his wife Colleen McCloy Allen, his children Melanie Halverson (Jeramie), Marci Wulff (Ryan), Billy Allen (Becky), Nickole Brooks (Beau), Robyn Dobruck (Brian), Dan Allen, Heidi Allen (CJ Howe), 18 grandchildren, sister Helen Jensen (Allen), and in-laws Mike & Vera McCloy, Carolyn & Gary West, Jalene & Mike Pope and many nieces and nephews. Funeral services will be held 11:00 am, Thursday, December 30, 2021 in the Bluffdale South Stake House, 15429 South Iron Horse Blvd, Bluffdale, UT, There will be no public viewing. Services may be viewed on-line at Bluffdale South Stake, 13th Ward. Service Link: https://www.bluffdalesouthstake.org/13th-ward Dan will be buried in the Spanish Fork Cemetery following the services.

Dan William Allen 1947-2021 Dan William Allen was born July 3, 1947, in Salina, Utah, to Bill and Ruth Allen. He grew up in Spanish Fork, Utah and served an LDS mission in Palmyra, New York. He went to BYU where he met his beautiful wife,... View Obituary & Service Information

The family of Dan William Allen created this Life Tributes page to make it easy to share your memories.