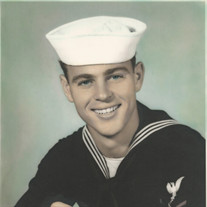 Dan Rulon Heaps passed away peacefully in his home Monday, December 4, 2017. Dan was born December 19, 1933 in Los Angeles, Ca, to Rulon and Lola "Fern" Coolbear Heaps. Dan graduated from Whittier High School in 1952. He enlisted in the Navy before he graduated and left immediately to serve his country when he was finished with school. Dan was a member of the Church of Jesus Christ of Latter Day Saints. He was called and served in the Central States Mission in 1956. Dan worked as a mechanic and owned his own forklift repair business for many years. He served in various church callings throughout his life, including boy scouts (which he loved) and he was a dedicated home teacher. His favorite pastime of "all time" was archery. He loved to go to the park or up into the hills with his bow and arrows to target shoot. Dan & Carole were married in the Los Angeles temple Aug 13, 1959. Together they had five children. Years later their family increased with the addition of a foster son. Dan was preceded in death by his son, Daniel, his grandson, Charles "C.J." Smith, his sister and brother-in-law Lola and Harold Johnson, and his parents. Dan is survived by his wife of 58 years, Carole, and their children Carolyn Spicer, Diana (Rod) Schultz jr, Renee (Chuck) Smith, Valerie Heaps, and their foster son Rob (Lesley) Bradley. He is also survived by his grandchildren Kevin Spicer, Jamie (Patrick) Watts, Rodney III (Tiffany) Schultz, Tiffany Schultz, Carissa Smith, Branden, Trevor, Ashley & Tyler Heaps, and Averile & Ashton Heaps, as well as three great-grand sons, Rodney IV, Colton & Tayden Schultz. Funeral service will be held on Friday Dec 8, 2017 at the LDS church 105 Fishburn Drive, Brigham City, UT 84302. Viewing 10:00 am and funeral at 11:00. Interment will follow at Brigham City Cemetery 300 East 300 South, Brigham City, UT 84302.

The family of Dan Rulon Heaps created this Life Tributes page to make it easy to share your memories.