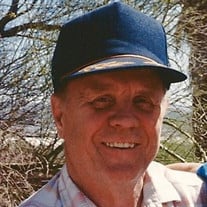 Daniel Victor Lubecke 1927 - 2017 Daniel Victor Lubecke, age 89 passed from this world on Friday, June 23rd surrounded by his loving family. Daniel was born in Amherst Junction, WI on October 31, 1927 to Charles and Gertrude Lubetski. He was the 5th of seven children. He served his country in the Army Air Corps during WWII, part of that time being stationed in occupied Germany. He went on to experience many great adventures and thought he would be a bachelor forever. That changed in 1959 when he met Carmela Diaz while he was sightseeing in Mexico City. They married in Mexico City shortly thereafter and they settled down in Whittier, CA. Carmela remained the jewel of his life from that point on. They happily raised two children together. He worked for North American Rockwell in Downey, CA for many years as part of the Apollo spacecraft project. He was an electronics wiz and later worked for Zenith as Tech Support for TV repair men all over the country. He also taught evening electronics classes at Cerritos College for many years. After they retired, Dan and Carmela moved to Spanish Fork, UT in 1994. He was a very active member of the Spanish Fork Senior Citizens Center. He could often be seen volunteering to help with the food bank, sing with the chorus or play his harmonica at their luncheons. He especially enjoyed playing hours upon hours of pinochle with his many new friends. His family however, was his greatest joy. He was a devoted husband, father, grandfather and great-grandfather. If you look up the word “grandpa” in the dictionary his picture should be right there. He loved his family deeply and was a wonderful example to all of them. We will miss him more than words can express. He was a lifelong devout Catholic who served as a Eucharistic minister for many years at San Andres Catholic Church in Payson. He is survived by his wife, his daughter Susan Fay (Dennis), son Victor Lubecke (Olga), his grandkids, great-grandkids and a brother Charles Lubecki of Florida. Services will be held Thursday, June 29, 2017 at San Andres Catholic Church, 315 East 100 North Payson, UT. A viewing will be held at 10:00 am with a eulogy given just before the funeral mass at 11:00 am Interment will follow at the Utah Veteran’s Cemetery The family would like to express their gratitude to the caregivers at Utah Valley Specialty Hospital and the staff of Hall 900 at the Central Utah Veteran’s Home who were so wonderful to him.

Daniel Victor Lubecke 1927 - 2017 Daniel Victor Lubecke, age 89 passed from this world on Friday, June 23rd surrounded by his loving family. Daniel was born in Amherst Junction, WI on October 31, 1927 to Charles and Gertrude Lubetski. He was... View Obituary & Service Information

The family of Daniel Victor Lubecke created this Life Tributes page to make it easy to share your memories.