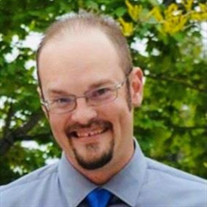 Daniel Lloyd Marchant returned to his heavenly home on December 20, 2020. His unexpected death leaves a hole in the hearts and lives of those who knew and loved him. Daniel was born to Dorothy Jean Marchant and Lloyd Garcia in Ogden, Utah on December 30, 1982. Daniel developed a lifelong love of dogs as a little child. He spent his childhood being doted upon by his older sisters. His favorite color was blue. Following his time at Clearfield High school, Daniel worked in many jobs. He was a jack of all trades. Daniel was a welder and worked in production and heat treatment. He worked hard to provide for his family. He spent his spare time working on cars and was quite the mechanic. Daniel’s greatest love was his boys. The births of Elijah, Isaiah, and Anthony brought so much joy to Daniel’s life. Daniel’s other great love was his wife, Heather Johnson. They were married in Layton, Utah on April 25, 2015. With their marriage, he gained two more sons, Gannon and Zayd. Daniel was known for his big heart and his goofy smile and personality. His too short life was filled with many disadvantages and challenges. Despite these challenges, he maintained his smile and his kindness. Daniel was loved by all who knew him. He was a social butterfly, even if he said he had social anxiety. Everywhere he went, he made friends quickly. He was preceded in death by his mother Dorothy, stepfather Tom Simpson, and father Lloyd Garcia. He is survived by his wife Heather Johnson, his sons Elijah, Anthony, Isaiah, Zayd, and Gannon, and his siblings Paula (Dick) Wardell, Shauna (Tom) Birt, Linda (Brendon) Gallego, and Michael (Tammi) Byrne. A viewing will be held on December 31, 2020 from 1-3 PM at Premier Funeral Services 5335 S. 1950 W. Roy, UT. A funeral service will be held for him following the viewing at 1708 W 800 N Clinton UT at 3:30 PM. In lieu of flowers the family would appreciate donations toward funeral costs. Donations can be made at the funeral and viewing or can be made through Facebook Pay to Heather Johnson - Marchant, or through Venmo @Heather-Johnson-640 For a Zoom link for anyone unable to attend Daniel's services click https://us02web.zoom.us/j/88398120628?pwd=Uk4ra0MwOU5rUGIXMEtWYk1heDhkdz09 to start or join the meeting.

Daniel Lloyd Marchant returned to his heavenly home on December 20, 2020. His unexpected death leaves a hole in the hearts and lives of those who knew and loved him. Daniel was born to Dorothy Jean Marchant and Lloyd Garcia in Ogden, Utah on... View Obituary & Service Information

The family of Daniel Lloyd Marchant created this Life Tributes page to make it easy to share your memories.

Daniel Lloyd Marchant returned to his heavenly home on December...