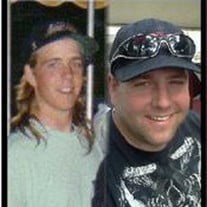 Daniel Karl Zerba beloved husband of Sherry Ann Zerba, 37, passed away on Monday, January 23, 2012 at Intermountain Medical Center in Salt Lake City, Utah He was born in Spokane Washington on October 17, 1974 to Joyce and Daniel Brown and was later adopted by Joyce's husband, Alan Zerba where he and his brother, Brian took on the Zerba name. In Daniel's younger years he spent some time in Italy as a military brat and treasured his time in California where he made many good friends who still admire and treasure his friendship to this day. He had a love for skate boarding and dirt biking and became quite good at those sports. He also loved bowling as well. One of Daniel's favorite quotes was, "Fake it till you Make It." and he lived by that quote as he became quite good at carpentry. He started building skateboarding ramps and as time moved on built many houses and continued to develop his talents as time went on. Dan could learn anything he put his mind to and he used his skills and talents to help many people in the course of his life. As well as gaining the love and compassion of many family and friends along the way. Daniel's middle name should have been compassion as he rarely said, no to helping anyone and was very fun and personable to talk to. One of Dan's biggest loves in his life was his children and in return his children loved him very much as well. He is survived by his children, Jeremy, Zachary, Rebeca, Jacob, and Malachi and through marriage took on Rachel, Rosealine, Lucas, Kala, Tristan, and Ryqer as his own. He is also survived by his Mother, Joyce Devore with Galen Smith and Brother, Brian Zerba with Carrie Denney and Fathers, Alan Zerba Married to Ivy Zerba and Daniel Brown. He lived in Pocatello, Idaho for many years where he was married twice. His first wife Nicola, and his 2nd wife Alice. He found the love of his life Sherry at the age of 31, on an online dating site and moved to Salt Lake City Utah to be with her and her 5 kids. Daniel and Sherry were married on May 24, 2006 where they spent 5 1/2 wonderful years together. At that time he gained his General Contracting license and went to work with his Father in Law Jerry Bennion in the family Business Bennion Fireplaces where he learned to love the Fireplace Business and eventually started his own Business D-N-A Builders Inc. DBA Dan's Fireplace Service Repair & Construction where he worked with his wife and good Friend Johnny. It was a tragedy that we lost him at such a young age. He will be missed greatly. Salt Lake City, Utah Funeral Services will be held at 11:00 a.m. on Friday, January 27th with viewing at 9:30 to 10:45 a.m. at the Winder 7th Ward building located at 4350 South 100 East, Salt Lake City. There will also be services held in Pocatello Idaho on Monday, January 30th at 12 noon with viewing at 10:30 to 11:45 a.m. where he will also find his final resting place near family and loved ones at the Mountain view Cemetery. Daniel you will be greatly missed by many.

The family of Daniel Karl Zerba created this Life Tributes page to make it easy to share your memories.