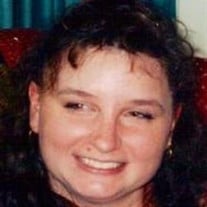 Danielle (Dani) Allegra Thomas, 45, of Tooele, Utah, passed away on January 25, 2014 in Murray, Utah. Dani was born on November 9, 1968 in Baltimore, Maryland. Dani, with her parents, Linda Dorset and Jerry Morgan, and brother Jonathan moved to Kailua Hawaii in 1984. Dani attended Kailua High School where she met her High School sweet heart, Gregory (Greg) Andrew Thomas. They were married on February 14, so that they could celebrate their anniversary on Valentines day, every year. They had three beautiful Children together, Taylor Cheyenne Thomas,16, Justin Analu Thomas, 19, Halie Nahokulani Bates 22, who was married on January 24 to Caleb Bates. In typical Dani humor, she frequently referred to her kids as "The Children of the Corn" Dani and Greg moved to Salt Lake valley, in 1994, with their 2 oldest children in search of a better life for their family. After settling in they gave birth to their youngest daughter. Dani found employment with Smith's Market place in Holladay. The Smith's team quickly became a surrogate family and after a 19 yr career there, all became an invaluable part of her life. While in the Salt Lake valley she volunteered much of her time to better her children's lives by volunteering with the local PTA and Girl Scouts. Dani got acquainted with the loving caring group of "Kicking Cancers Can" in 2011. They were a huge support to Dani and her family and she was thankful to them every day. In 2012, she looked for a new challenge and went to work at OC Tanner. In her short year there she made many new friends and touched a new work family with her warmth and love. Dani had so much love to give that it could not be contained to one species, she always surrounded her self with animals of all kinds. Her dogs, snakes and rats will also be missing her love. The family would like to extend their gratitude to the amazing caregivers at Intermountain Medical Center ICU and 9th floor. Your extraordinary professionalism, flexibility, and understanding were integral to the family during this difficult time. There will be: A Celebration of Life for Dani Thomas Memorial and Reception January 31, 2014 6 pm LeJardin Greenhouse and Gardens 1910 Dimple Dell Rd. (10600 S.) Sandy, Utah 84092 (801) 326-2511 http://lejardinweddings.com/about-us/ This is a celebration, the family is requesting anyone attending to wear pink and or purple A memorial fund has been established to help the family with medical bills accrued during her treatment. Any donations can be deposited to the Danielle Thomas Memorial Fund at America First Credit Union

The family of Danielle Allegra Thomas created this Life Tributes page to make it easy to share your memories.