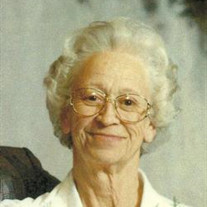 Darlene Hall Petersen, 81, loving wife, mother, sister, and friend passed away peacefully early Wednesday morning, January 14, 2015 in Provo, Utah. Darlene was born March 18, 1933 in Manti, UT to Milton and Alice Hall. She married Birk J Petersen on September 5, 1953 in Manti, Utah. The marriage was later solemnized in the Manti Temple. Darlene loved spending time with her family and being a homemaker. She enjoyed many needlecrafts including sewing and crocheting. She was an excellent cook and spent time each week baking several loaves of homemade bread. The neighbor boys could smell the bread from a mile away and always "just stopped by" for a hot slice. Darlene's greatest joy was being around children. Darlene is survived by her husband Birk of 61 years of Provo, Two sons; Mark (Angela) Petersen of Mapleton, and Gail Petersen of Orem, and three daughters; Joy Petersen of Pleasant Grove, An Cooper of Provo, and Liz (Dave) Brady of Saratoga Springs, seven grandchildren and five great grandchildren. She is preceded in death by her parents and daughter Diane. The family would like to express their gratitude to Susan Chasson her nurse practitioner, her home health nurse Sean, Curo Hospice, and the Enhanced Care staff at Courtyard at Jamestown for all the love, support, and care they showed to Darlene and her family. The family will be holding a viewing on Monday, January 19, 2015 from 6-8 PM at Premier Funeral Services, located at 1160 N 1200 W in Orem, Utah. A graveside service will be held at 11:00 am, Tuesday, January 20, 2015 the Provo Cemetery.

The family of Darlene Hall Petersen created this Life Tributes page to make it easy to share your memories.