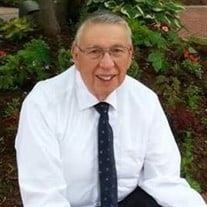 Darrell George Conder 1934-2019 Darrell George Conder, 1934-2019, beloved husband, father, grandfather, brother, uncle and friend, returned to his heavenly home on March 4, 2019. He was born January 16, 1934 in American Fork, Utah to George Alfred and Ina Nielson Conder. He grew up with siblings Lorna (Hays-Alexander), Neldon, Eldon, Margaret (Grygla) and Gareth. All of his paternal immigrant ancestors were among the founders of American Fork, and he has 11 direct ancestors buried in the cemetery there, where he too is buried. He attended BYU, served a mission to the Northern States, then served on active duty in the US Army for two years, before he met his wife on a blind date. They were married August 17, 1959 in the Salt Lake Temple. Their dear children and spouses are: Craig and Karen Spilker, Daniel and Deri Walker, Jonathan and Yvonne Petty, Phillip and Mary Barth Leatham, (Lori Simmons—div.) James and Tamara Larson, and Janna and Taylor Richens. The grandchildren have also been precious and much loved blessings: Nathan, Matthew, Nicolas, Samuel (Anndi Snyder), Joseph, Trevin (CJ Jacobs), Benjamin, Peter, Jacob, Zachary, Justin, Adam, Jason, Aliza, Alice, Kyia, Bryce, Caprice, Darcy, Stephen, and Lydia. Over the years honorary members have been included in their family circle, especially the family of Keith and Natalee Fehr, all of whom survive him Darrell was devoted to his family. They were always central to his life and concerns. He and Marj tried to always be there for their family and they worked hard to keep their family close and to mirror the importance of the gospel in their lives. This including taking children and grand-children to important family and Church History places like Palmyra, Nauvoo, Winter Quarters, Martin's Cove etc. and cemeteries throughout Utah. They also visited national history places, like New York City and Washington D. C. with their family. Darrell's family interests included past generations, and he spent a lot of time gathering genealogy and doing temple work for his ancestors. He was also a champion “indexer”. Darrell was a faithful member of The Church of Jesus Christ of Latter-day Saints; Among the places he served were as a bishop's counselor, ward Executive Secretary, High Counsel, High Priest Group Leader (several times), Sunday School President,, Stake financial clerk. For 22 years he was a veil worker at the Salt Lake Temple and then for over ten years he served as an Ordinance Worker in the Jordan River Temple. Over a lifetime he was also a faithful Home Teacher and helpful neighbor. He also quietly helped to support many, many missionaries, both extended family and others. He always saw money, first and foremost as a means to do good. He never hesitated to give when he saw a need that he had the means to address. He was a hard worker. His first for money job was when he was six years old, picking raspberries for a neighboring farmer. He moved seamlessly from job to job and until he retired, in 1999. He was never without a job. As an adult he worked for the Genealogy Department of the Church o f Jesus Christ of Latter-day Saint, then to Sperry Univac in 1960 (where he was introduced to programming computers when programming meant rewiring the machine). He next worked programming mainframe computers for Eimco where he was also a systems analyst. He finished his employed years back with the Church in charge of the computer program for worldwide membership records. Even in retirement he stayed busy, especially making a difference for good in the lives around him. He made treasured quilts for all of his grand-children and many others. Little kids always gravitated to him. However, his grand-children were always glad when they finally turned seven, having spent an entire year trying to make grandpa understand they were “not sick, but six”. He could build or repair almost anything. He built two major additions onto the family home and remodeled most of the rest of it. He readily shared these skills with others, especially his children as they purchased homes. And until his health started failing he always had a large garden, the bounty of which he readily shared. He loved his family and his Heavenly Father.. He had a strong testimony of the restored gospel of Jesus Christ. His wise and thoughtful counsel blessed many. He always emphasized the importance of “attitude” as well as the progression from “Knowing to Doing to Being”. He had a kind and tender heart. Darrell was the glue that held our family together, You always knew he loved you. He will be sorely missed. Darrell/ Dad/Grandpa, We Love You! And we look forward to being with you again. Darrell was preceded in death by his parents, sisters Lorna and Margaret, and brother Eldon. Visitation and Service information--Friends and family are invited to gather at the family home on March 22, 2019 between 4-8 pm or at the LDS Church at 81 East 7100 South from 10 to 11 A.M, the next day, March 23rd. A memorial service will follow at 11. Condolences may be shared at (list wed site.) A simple family graveside service was held on March 5th to accommodate four of his children who had responsibilities out of state starting the following day. Our thanks to many people who have shared memories, condolences and such. A special thanks goes to grandson Matthew who did “yeoman duty” in helping his grandpa navigate this passage over a number of weeks. We also appreciate our ward family, the staff of Bristol Hospice, and Premier Mortuary for their loving and excellent care. In lieu of flowers, we suggest donations made in his name to the local or general LDS Church Missionary Fund, or the Humanitarian fund.

The family of Darrell George Conder created this Life Tributes page to make it easy to share your memories.