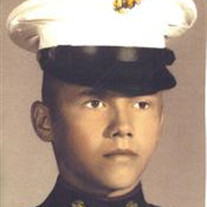 David Allen Bean was born July 18, 1949, in Salem Oregon to Charles Vern Bean and Anna Louise Bean. David was the third son with Robert Gary and Michael Larry proceeding him, Patrick Frances was next after Dave, followed by Susan Monitta, Sally Marie, Matthew Charles, and Karen Lee. He gained a second "Mom" with Murleen Ockey Bean, after the death of his mother in 1963. David grew up in Silverton, Oregon until the age of 15 when the family moved to Central Utah. He graduated from Emery High School in 1967. He then enlisted in the U.S. Marine Corp. with his brother Patrick, subsequently serving two tours in Vietnam. David met the love of his life, Mollie Jessie Herrera. They were married in Elko, Nevada on May 20, 1973. This year would have marked 40 years of marriage. They have two beautiful daughters, Aimee Louise, married to Justin Dennon, and Amorette Waunetta, married to CJ Pedler. Dave was a family man who loved his grandchildren with all of his heart; Darian Jessica (18), Justin Emerald, Jr. (11), Giselle Mia (11), and Zane Nicholas (9). He took pride in their many accomplishments. David was a member of the Iron Workers Local Union 27, and was proud to have been a part of many successful projects, including the Alaskan Pipeline. Dave enjoyed many things in life. He had many collections, including road and travel maps, old books, coins, stamps, the list goes on! Dave loved old cars, but enjoyed working on them even more! He loved all animals, but held a special place in his heart for Rhodesian Ridgebacks. He was preceded in death by his parents, his best friend & brother, Patrick, and his dog, Jude. Funeral Services will be held at 11:00 a.m. Tuesday April 9th 2013 at St. Joseph the Worker Catholic Church and will be preceded by a viewing starting at 10:00 a.m. Burial will be held immediately following the services at the Utah Veterans Memorial Park.

The family of David Allen Bean created this Life Tributes page to make it easy to share your memories.